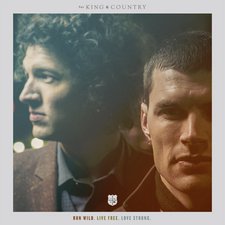 The brothers Smallbone, better known as for King & Country, have been hard at work since their debut album, Crave, released in 2012. The two have been constantly touring, released a live album, a Christmas EP and have yet to shake off the spotlight. In fact, they have been so busy that it seems like it's been longer than two years since their last album. Joel and Luke (despite Luke coming down with a debilitating illness), however, did find time in their bustling schedule to record a brand new album. Run Wild. Live Free. Love Strong. picks up where things were left off with Crave as they continue to walk a fine line between straight-forward contemporary and well-crafted pop songs.

The album opens with a somewhat surprising guest spot from Andy Mineo on "Run Wild." While it's been commonplace for hip-hop artists to invite contemporary and pop artists onto their records as of late (fK&C themselves are featured on Lecrae's new album), you don't really see the process working in reverse as much. fK&C take a chance from the start in alienating some of their radio fans with Andy's appearance, but it pays off. The open feel of the track welcomes Mineo in nicely and his contribution is fairly easy, even for those who don't listen to hip-hop, to understand. The big drums of "Prelude" bring in an album best "Fix My Eyes." The song demands that you sing along and is already a hit on Christian radio stations. "To the Dreamers" offers up more of what you want from the Australian duo. The tune has an African flare and could easily fit into a Disney flick set out in the Serengeti. The first misstep on RWLFLS is in "Shoulders." It's not as interesting musically as other songs present and the theme has been copied several times in recent memory. When the brothers sing, "My help comes from You. You're right here pulling me through," I can't help but think about "My Help Comes From the Lord" by The Museum or "Praise You in the Storm" by Casting Crowns. "Shoulders" is probably a better song than those mentioned, but the recycled content makes it lose some luster. "No Turning Back" is another stand-out in this stable of songs. The way fK&C gives their music such a large and open feel is refreshing in today's over-processed music industry. With this track in particular, they manage to do that and include some modern pop edge and tricks. The song ends with the refrain from the classic hymn, "I Have Decided to Follow Jesus."

"Without You" is a beautiful duet with Luke and his wife Courtney singing about the strong feelings that arose out of Luke's sickness, set to piano instrumentation. "Long Live" is a fitting follow-up as it seems to answer the vulnerability of "Without You" with an anthem of life that declares, "Long live the young at heart; you know who you are. With your spirit burning take a risk, take chance; carry on." "Keep Me Steady" is another enjoyable, upbeat pop song that will have you itching to sing along with your best Australian accent. "Almost Home" provides a promise of God's love and presence even in the loneliest times. "This is Love" is the most blatant modern pop song present and doesn't really fit as well with rest of the album. In the grand scheme of things, it's a fairly easy song to skip over. The weakest number, however, is followed by what is possibly the most powerful one in "Matter." The brothers proclaim, "To the One who spoke and set the sun ablaze. To the One who stopped the storm and walked the waves. To the One who took the tree so He could save: You matter; I hope you know you matter." In a world where people are told they are insignificant, and are treated as such every day, people are reminded in this message that no matter the case, you are important and loved by the only One who truly matters: God. "It's Not Over Yet" is another enjoyable pop song that leads to the much more somber closer. "O God Forgive Us" is the opposite of the rest of the album musically. The prayer of forgiveness for shortcomings and lack of faith is quite minimalistic on the musical scale. The simple piano and strings are joined by a nicely timed organ at the 1:55 minute mark for the bridge, but fades out after only a minute to close the song. The album also features a bonus track of sorts as a slight swell re-enters at the 3:50 mark of "O God Forgive Us." The bonus track gives an explanation of the album title and gives a kind of altar call; calling listeners to "Let the light flood into Your eyes for the first time feeling the blood coarse through your veins; finding the truest version of yourself by knowing the One who knows you even better than you know yourself." The brief section is a poignant way to end an album chock-full of emotional experiences and lyrical content.

for King & Country have offered up a triumphant return with Run Wild. Live Free. Love Strong. For some reason, it seems to be "sacred ground" to some, but I just can't help but think of U2 when I hear a lot of their material. The influence is obvious and I think it's apparent that they are similarly skilled songsmiths. There are most definitely other influences present, but U2 remains the largest. While their sister, Rebecca St. James, is a CCM legend in her own right, the Smallbone brothers are probably the more talented songwriters of the family. That's a pretty deep gene pool... Run Wild. Live Free. Love Strong. hits all the marks and leaves very little you can't be satisfied with. Without a doubt, Joel and Luke have avoided any semblance of a sophomore slump. Contemporary and pop fans alike should find enjoyment in this record, but it honestly reaches further than that. Any fan of Crave will want to buy this album immediately, but even if you weren't impressed the first go-around, Run Wild. Live Free. Love Strong. deserves your attention anyway.

2012 saw the rise of the one of Christian music's biggest surprises with for King & Country. Luke and Joel Smallbone have talent in their blood, and their debut, Crave, gave an early taste of this potential. But after wild success on tour and radio, it's time for the inevitable sophomore album, and expectations run much higher this time. This makes an album like Run Wild. Live Free. Love Strong. a tad unsurprising, but still indicative of great things. While Crave succeeded at delivering a theatrical feel while also exercising a strategic measure of restraint, its follow-up seems to forgo the latter aspect of the duo's creative direction; opting for full-on dramatics at nearly every turn, the result is a sometimes exhausting listen. The percussion-based intro for "Fix My Eyes" overdoes things a bit, as does Andy Mineo's rap on "Run Wild" that poorly fits with the rest of the album. Even down to the record's punctuated title, Run Wild. Live Free. Love Strong. tends to overcompensate in many respects. With all of that being said, however, the undeniable ambition makes the project's overall value much higher in the long run, as it plays to the Smallbones' strengths in the aspects that matter most. The vocal pairing is top notch like before, and the album is an entertaining ride with captivating tracks throughout ("To The Dreamers," "Steady," "This Is Love") and two stunning ballads at key moments ("Without You" and "O God Forgive Us"). It's unashamed in every step, but that's just in the duo's character. In the end, it's an album that often gives itself more fanfare than it needs, but the anthemic pop of Run Wild. Live Free. Love Strong. is a welcomed change of pace for the year's musical landscape. - Review date: 9/14/14, Roger Gelwicks

Joel and Luke Smallbone of for KING & COUNTRY may just yet overshadow their older sister Rebecca St. James. The wordy and rather awkward title notwithstanding, Run Wild. Live Free. Love Strong. shows us a more cohesive and complete album than Crave, and one that has a replayability factor like few in the CCM market. With hints of the brother's numerous and diverse influences coming at every turn, Run Wild presents a thoroughly modern and unashamedly enjoyable brand of music that has deservedly attained mainstream exposure. "Fix My Eyes," "Shoulders," "Long Live," "Already Home" and more highlight the fourteen-song tracklist of pop-rock goodness rarely seen since Rebecca St. James herself was putting out material. Between vocal chemistry, irresistible melodies, and a vast and engulfing sonic soundscape, 4K&C have crafted an album that I don't foresee many disliking. - 9/14/14, Mark Rice of Jesusfreakhideout.com