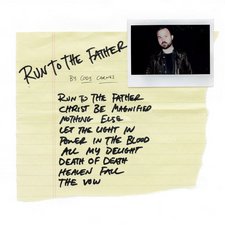 Cody Carnes
Run to the Father


The Darker the Night / The Brighter the Morning, Cody Carnes' debut, was a disappointing, directionless affair, failing to live up to the standards of Carnes' peers (or even his wife, Kari Jobe), except in its spotless production and his smooth, lovely vocals. Following years spent leading worship for both churches and conferences, his attempt to make a pop-CCM album offered little by way of evidence that Carnes actually knows how to craft or construct a good song. That said, his heart has always seemed to be in the right place when it comes to leading worship and creating environments for Christians to worship freely. And since the last album didn't find any notable amounts of success (outside of one of its best tracks, "What Freedom Feels Like," earning regular airplay within Starbucks stores), it makes sense that Carnes would move back to worship music on his shorter, more focused follow-up, Run to the Father.

In general, the songwriting here is more competent than it was last time around; there's a notable decrease of The Darker the Night's inconsistent rhyme schemes and unstructured melodies. The title track kicks off the proceedings well enough, with lush piano chords, big church choirs, and sparse percussion, altogether establishing what we should expect from the rest of the album, including its employment of lazy rhymes, mixed metaphors ("My heart needs a surgeon / My soul needs a friend"), and a sheer lack of energy. Drums don't enter the picture until halfway through the second verse, which isn't necessarily a bad thing, but it becomes a common formula throughout these songs to start soft and slow, only to build as drums, guitars, and harmonies enter one-by-one. Again, that's not inherently problematic, but when such a formula is used so prominently, it makes the songs more predictable and less effective.

In fact, there's only one song present that's actually upbeat, and that one upbeat song, "All My Delight," doesn't even appear until the album's second half. It's a breath of fresh air, and ironically, it might be Run to the Father's best song, but it's also a total outlier, the presence of which feels awkward, made worse by showing up so late in the game. I would never want to be the person who equates "slow" songs with "boring" songs, but Carnes leans so heavily into dull melodies, which never surprise and which rarely depart from singing squarely on half- and quarter-notes, that the mixture of his melodies with slow piano ballads truly does make this album a slog to get through. The same issue existed on The Darker the Night, but that album at least had more variance instrumentally. (By the way, "Heaven Fall" nearly constitutes as a second upbeat song, but as a mid-tempo rocker with less compelling melodies, it pales in comparison to "All My Delight.")

The rest of the songs oscillate between the laudable and the laughable. The lyrics of "Nothing Else" are truly encouraging, if not terribly original -- but still, the song's meaning is a reminder that Christians need daily ("More than anything you can do / I just want you"). Listeners less critical than myself will likely be encouraged by these tunes -- and to be fair, I was genuinely encouraged a few times, as well -- but that can't excuse lyrics that are wholly vapid and lazy. Consider the bridge of "Let the Light In," when, following a laundry list of common biblical images, the line "Open up the windows / Let the light in" gets repeated about fifteen times, which once again mixes metaphors and makes the light of Christ sound like it's supposed to be literal. Yet, while these songs are often slow and uncomplicated, they can also be quite beautiful: "Power in the Blood" gets a stunning treatment with its soft synth arpeggios and acoustic guitars, making it an album highlight; and "The Vow" does an excellent job ending the album with an extended piano solo, tarnished only by the presence of a background "ding" sound that annoyingly sounds like a metronome might have bled into the entire song's recording.

The list of collaborators on this album -- a serious who's-who of modern worship singer-songwriters, from Matt Maher to Cory Asbury -- is fairly telling. Carnes seemingly knew he'd need some heavy hitters to make a compelling album of original worship music. But as is often the case with co-writes, if the resulting song is seriously great, the co-writer involved would likely want to use the song for his/her own project -- especially since most of the songwriters involved are recording artists in their own right. To have a fruitful career as a recording artist moving forward, I personally believe that Carnes should transition into singing the songs of more obscure writers, or perhaps those who lack Carnes' impressive singing skills. It's sad to say, but the gifts this man has been given in singing and in leading worship are being wasted by his insistence on also trying to be a songwriter.