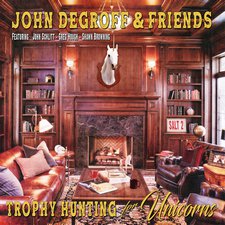 
John DeGroff entered the music scene as the original bassist for Petra. After leaving the band in the late '70s, DeGroff kept a lower profile. Then in 2018, DeGroff stepped back onto the main stage with SALT, a mostly instrumental album that pulled in a variety of talent and made for an enjoyable experience. Now, DeGroff and Friends return for the sequel, SALT 2: Trophy Hunting for Unicorns. If the first album was a "getting the band together" outing, the follow-up finds a firmer footing and a more solid record.

As with the first album, instrumental tracks rule the roost here. DeGroff and company throw out a variety of genres to play to from jazz ("Alone Again") to blues ("Bassic Blue") to more psychedelic rock ("Visible From Space"). While some might be annoyed at the constant shifting of tones, this reviewer found it enjoyable. One never knows what will come from the speakers next and that makes for a fun experience. The music also fits the titles. "Alone Again" feels like the type of track someone would play for themselves on a lonely Valentine's Day. "Conversation" carries a back-and-forth that mirrors the real life act, while "Please Don't Feed the Rino" is as playful as its name. One problem with the previous work was that some of the transitions or movements didn't feel quite as smooth. Consider that problem fixed for SALT 2. The instrumental tracks improved greatly overall for this outing.

But there are also lyrical songs sprinkled in, too; this time they number five. Once again John Schlitt (formerly of Petra as well) takes the lead vocal duties and the songs fit his voice more comfortably in this go-around, with the tracks leaning toward straight-up rockers. The one exception to Schlitt's presence is "Anachronistic Anachronism," where Shawn Browning steps up to the microphone instead. This works well as the song is a rockabilly throw-back and while Schlitt is a talented vocalist, that style isn't best suited for him. The lyrical songs tend to feel like an older person trying to impart wisdom to a younger generation. "Screens" and "When the Grid Goes Down" warn of our tendency to lose ourselves in technology. The aforementioned "Anachronistic Anachronism" finds the singer feeling out of place with the world. "Abundantly" and "Three Nails" are the more straightforward CCM-type tracks with the former trusting in God's provision in daily life while the latter highlights God's provision for salvation through Jesus. These lyric-based tracks are huge improvements over what SALT offered, but still have moments where the rhyming or wordplay feels off or forced.

Is there another album like SALT 2 out there, especially in the Christian industry? I am not aware of it. Did we need an album that fuses multiple genres across instrumental and lyrical tracks all served with a mix of somber sobriety and cheeky humor? After 2020, why not? It may be something of a melting pot, but this record is a delight to listen to. It also projects themes of finding immortality. Consider the subtitle: Trophy Hunting for Unicorns. Can we live forever in technology? Will we ever stop aging? Where will we find our place? As the closer, "Three Nails," suggests, the ultimate answer is in Jesus. So do we need a quirky album with such a point? Yes, I'd say we do.