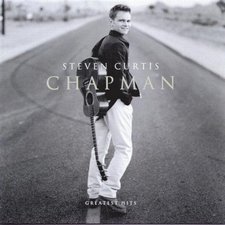 When looking back on the spectacular career of Steven Curtis Chapman, you could argue that his career as a recording artist has so far gone through three phases. His first phase started with the day he signed with Sparrow Records in 1985 and covers the first decade or so of his career. The second starts with the release of his smash hit album Speechless (or, perhaps more specifically, the moment he began writing the song "Dive"), marking a distinct turning of the corner in terms of focus and musical styles. The third, which he is currently in, began in the heartbreaking moment that he lost his young daughter Maria Sue.

Greatest Hits, originally released in 1997 (and re-released in 2008) is, in my opinion, a perfect summary of the first phase of his career which saw him move from being a prominent songwriter for many of Christian music's most popular artists in the mid-1980's to becoming a pioneer in Christian pop music during the 90's. At least one song from each of his albums up to 1996's Signs of Life is included in this collection, and not a one is out of place. But what really makes this more than a simple collection of music from his career so far was the very first track, a new release called "Not Home Yet." In this song, it was almost as if Chapman was letting us know that his best material was still yet to come, all the while providing encouragement to, no matter where we are in life and what hardships we are facing, "keep on looking ahead/let your heart not forget/we are not home yet." To this day, this song remains one of my favorites from SCC, and he even made a "Re:Created" version for those who preordered his 2011 album Re:Creation on iTunes. And it's selection as the opening track on the album that highlights his past works could not pull the project together into an experience rather than a collection more beautifully.

From there, the greatest hits begin. Next is "More to this Life," the title track from his gold-certified 1989 release. It is a must-have on this collection, but to me it seems to come a little bit early, especially since it is so similar in theme to "Not Home Yet," and it doesn't help that it sounds a bit dated to today's audiences. Following that is "The Great Adventure;" while this song is designed to be more of an opening track (as it was on his 1993 release if you don't include the instrumental prologue), it actually fits very well coming after the quiet and encouraging "More to this Life." And, being another one of my favorites and one of SCC's most famous songs, it still holds up well today.

Next is the country-flavored "That's Paradise," also from his 1993 release. Not one of his most well-known songs, this song is nevertheless a worthy inclusion and it works very well following up "The Great Adventure." Following that is "His Eyes" (from 1988's Real Life Conversations), which was his first award-winning song, winning the 1989 Dove Award for Contemporary Recorded Song of the Year. This is a very gentle acoustic song about God's eternal presence in our lives like the perfectly loving father to us that He is. And then just as we have been lulled back into quiet comfort, the opening chorus of "We will abandon it all/For the Sake of the Call" hits our ears. Frankly, this song sounds very dated (perhaps the most dated song on this collection), but no matter how dated it sounds, it will always be one of SCC's most defining songs. I love this song, with its strong and proud declaration in the chorus, its narrative of the disciples in the verses, and the call to us to do likewise. "For the Sake of the Call," the title track of SCC's 1991 release, is an incredible song and never gets old no matter how old it sounds.

Next is the song that has grown to become arguably the most popular wedding song in the past two decades. It is his deeply personal psalm written for and dedicated to his wife for their fifth wedding anniversary, "I Will Be Here." This song's continuing popularity and universal message is an ever-requiting testament to the strength, power, and comfort of love. And it fits in perfectly right after "For the Sake of the Call" as well, with a great blend of contrast in style and similarity in theme. Also, this song effectively wraps up the first half of the collection. Following that is the other new track to introduce the second half of Chapman's hits compilation, "I Am Found in You." If there is any song that "is out of place" by being included on this album, this is it. It is a great song, but it echoes more of what Chapman would release on Speechless than his first decade of work. I actually wouldn't be surprised if it was originally intended to be for Speechless. But this is only a little hiccup, as the retrospective is picked back up with "Heaven in the Real World," the title track of Chapman's 1995 release. Lyrically, it actually reminds me of something Casting Crowns would later write, but musically, it is also a tad bit dated. Nevertheless, it is one of Chapman's most famous songs, and it echoes back to "For the Sake of the Call" in terms of style. And following that is another from his 1995 release, "No Better Place." This song reminds me a bit of "The Great Adventure," only more percussive and in a style more similar to the preceding song. But it is quite catchy and easy to sing along to.

The next four songs represent the extremes of both ends of the spectrum, with the first two being "quite old" and the last two being "quite new." "Hiding Place" is the lone representative of Chapman's very first album, 1987's First Hand, an 80's-flavored hymn for finding refuge in God. "His Strength is Perfect," from Real Life Conversations, follows it as another hymn-like song from the 80's. These two songs work almost like one song since they are so similar in style and theme, and while that is a lot of hymn music to listen to at once on an album like this, they work off of each other, and they effectively set up the last two songs on the album as kind of a "here's where I was, now here I am" sort of message. Both of these last songs, "Lord of the Dance" and "The Walk," were originally released on 1996's Signs of Life, and then re-recorded at the famous Abby Roads Studio in London. "Lord of the Dance" is another of my all-time favorites from SCC, and it is so catchy, I have a hard time trying not to sing along. As for "The Walk," many people who have only heard Chapman's newer stuff will be very surprised (hopefully pleasantly surprised, because I was) that Chapman can sing a straight-up country song like this. In fact, Chapman's three albums prior to this collection all had a few country songs thrown in, and if he were to have chosen, he probably would have made a very successful country singer.

As the years pass and phase one of Chapman's career gets further and further behind us, my appreciation of this collection only increases. It is so easy to forget completely about phase one since phase two and phase three are so fresh in our memories, but it was this first phase that made Steven Curtis Chapman a CCM pioneer and the inspiration behind countless successful musical careers today. This album isn't perfect, but it is nonetheless fantastic, and I would give a definite recommendation for it to anyone.