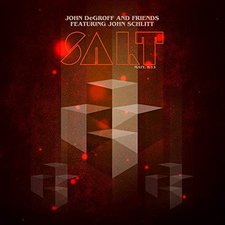 
John DeGroff may not be a household name among Christian music fans, but he is one of the founding members of legendary rock band Petra, which is better known. He played bass on Petra's self-titled debut and Come and Join Us before exiting the group and keeping a lower profile. In the past 15 years, though, he's been slowly returning to a bigger stage, first by appearing with Petra during their "Farewell" tour and starting a band with a couple other founding members. Now some friends have joined DeGroff and together they have made Salt, a mostly instrumental album driven by jazz and '70s rock elements.

On one hand, the sound on this album feels a little dated. But, on the other hand, the throwback style is quirky and fun. What helps this quirkiness is the way DeGroff throws in different instruments to vary the sound. One track may contain flourishes on the guitar ("Dave's Living Room"), another accented by a piano ("Sneeze"), and then another is highlighted by the flute ("Silk and Cookies"). He also throws in a couple of softer acoustic guitar driven tracks ("Wish I Was a Child Again" and "Theme for a Perfect Day"). Leading it all is DeGroff's jazzy bass grooves, which give the record a unique feel and warrant playing it on a sound system with good bass settings. As you can tell, the track titles also give things a different, fun feel. The major hiccup among the instrumental songs is that some of the transitions in movements are a little jarring, but with repeat listens, they smooth out some.

Though the instruments hold sway over Salt, DeGroff does throw in three rock tracks with lyrics: "Runnin'," "I'm Your Man," and "From Yes to No and Back Again," all featuring John Schlitt (one of Petra's lead singers) on vocals. That latter one is the strongest of the trio, playing with a three-act structure and giving both the band and Schlitt room to flex their creative muscles. Unfortunately, the lyrical songs sound the most dated and serve as the weaker tracks (with the exception of that last one). They do, however, present a blatantly gospel message reminiscent of the Jesus People movement and Petra's early albums. Overall, the production quality doesn't feel quite up to par, but for the majority of the record that adds to its character.

Fans of classic rock and jazz instrumental albums will find something to enjoy here. Salt is quirky, fun, and meaningful. Modern listeners may balk at some of the quality, but it's worth a listen or two. Frankly, it'd be nice to see more Christian artists exploring instrumental albums in whole or in part. An artist can worship God with his/her hands as much as with his/her voice and words. Give this album a chance and it will be salt to your musical taste buds, leaving you thirsting for more. Listen to the message behind the lyrics and you'll be thirsting for Jesus.