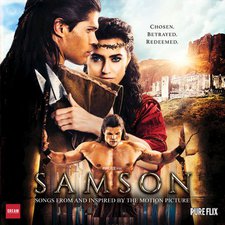 Various Artists
Samson (Songs From and Inspired By the Motion Picture)


Last year, when Pureflix released The Case for Christ movie, they teamed up with DREAM Records to produce a soundtrack inspired by the film/book. This year, as the movie studio readies for the release of an adaptation of the Samson story from the Bible, DREAM has provided another "Inspired by" soundtrack featuring nine artists of varying styles.

While most of the artists on Samson (Songs From and Inspired By the Motion Picture) fall into some variety of pop worship, The Potter's House and MUSITRY offer more soulful tracks, and New Season Christian Worship Center (winner of longest band name on this compilation) turns in a Spanish-tinged tune. Most of the songs are subdued with occasional bursts of energy, but overall feel cinematic and would easily fit over the end credits of the film. Lyrically, most of the artists make strong allusions to Samson's story, while others take themes and craft generic praise songs out of them (like Emmanuel Church's "Stronger" and Seacoast's "Strength and Victory"). With the context being a film about Samson, it's the songs that are more connected to the story that stand out, while the loosely based songs fall flat and fail to distinguish themselves.

Among the tracks that are worth visiting here include The Rock Music's slow burn opener, "One More Time." This track looks through Samson's eyes (or lack thereof) before his final, fatal act as he calls upon God for vengeance. The song surprisingly leans into the aspect of judgment as he cries, "Will You use me now to judge them/And to punish with the rod?" Other notable additions include MUSITRY (featuring Joel Kibble of Take 6) with "Reconciled," an honest prayer between Samson and God as the strong man struggles with his sin and its consequences. "Forbidden Love" by New Season catches the ear with its music, though the lyrics aren't entirely clear in their message. Is God's love forbidden? Or is this about Delilah? The Cloud Music also make a good contribution with "Home," another heartfelt song seeking redemption and peace, a theme most of the artists chose to run with (the rest focusing on strength).

I opened by mentioning The Case for Christ soundtrack because I wanted to acknowledge the leaps and bounds Samson has over it. The overall cinematic sound makes it feel more connected to the movie and special. Although the songs are slightly stronger for this compilation, they still sit somewhere in the middle of the road. Admittedly, having these artists try to take the story of a man who spent most of his life disobedient to the Lord and coming up with happy worship songs inspired by that is a tall order. For the most part they do well, though occasionally there are awkward applications made, such as The Potter's House singing "I'll go blind just as long as they see You" on "Nothing to Lose." Outside of a soundtrack about Samson, that's a fine sentiment, but in this context it made me cringe. The loss of his eyes was actually the result of his sin. The order of the tracks is also questionable as we begin at the very end and jump around with no discernible reason for the rest of the album. Some chronology to the songs would have helped this feel more thoughtful and cohesive. If you see the movie and enjoy it, you'll probably find more to enjoy here. Otherwise, you may have to sift through the sand to find a couple diamonds worth keeping.