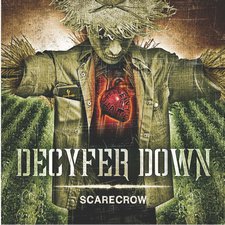 Decyfer Down has been silent since 2009's Crash. While some loved the post-grunge sound found on the group's first two outings, many were turned off and found that it was a little stale. Now, four years later, the band finds themselves back in the fold. Fortunately, the group has decided to drop the post-grunge sound and have moved towards something that is more within vocalist TJ Harris' wheelhouse. Scarecrow features a more straightforward rock approach and is more in line with what Harris was doing in Fighting Instinct.

The record opens with a rocker in "Memory;" the grooving guitar riff is complimented nicely by TJ's vocals. While it's not really a mind blowing track, it does open the album up on a positive note. The second song addresses Westboro Baptist Church. The open line cuts as it points a stern finger to the church's ideals by saying, "Hey, man. That's my brother's grave you're spitting on." The chorus gets a little more in your face as TJ sings, "Just go back to Westboro, baby; where they love to hate. Just go back to Westboro, baby; the devil said you can stay in hell it's just the same." Anyone who has grown tired of the church's tactics of boycotting soldier's funerals, among a laundry list of others things, will find themselves enjoying this one. While there are other positive songs present, such as the Stone Temple Pilots feel of "Worst Enemy," nothing really quite reaches the overall intensity of "Westboro." "Bleeding Lies" is the first slower song on the album, but it's not quite what you would call a ballad. The tempo of the song along with the sound of the guitars and vocals make it an album highlight as well.

While Scarecrow is a definite improvement over Crash, or even End of Grey for that matter, it still leaves a little to be desired. There are certainly highlights and good songs present on the record, but there isn't a whole lot that sticks with you after listening. "Westboro," "Worst Enemy" and "Bleeding Lies" have the potential to linger in your subconscious, but not much else really jumps out beyond that. Decyfer Down's newest probably won't land on many people's top 10 lists come this year's end, but it has shown that the band isn't one to count all the way out yet. Four years have given the guys time to regroup and reload and have produced an album that is a fun listen from front to back. Rock fans should give this album a listen for themselves and see what they think of the new direction Decyfer Down is heading. They might just find themselves a bit surprised.

In 2006, Decyfer Down's End Of Grey came out of nowhere and took the rock scene by storm. Not so with their anticipated follow-up Crash. Now, four years later, we have Scarecrow. First up is "Memory," a lead that fits right in with the expected sound for the album: radio friendly rock similar to bands Shinedown or Three Days Grace. "Worst Enemy," "Fight To Win," and the title track follow those same lines, and each are decent tracks. Nothing mind-blowing, mind you, but you won't want to skip the track, either.

As for the negative aspects, "Westboro" repeats the words "hey man" way too much. Songs like "Say Hello" and "Some Things Never Change" are very simplistic musically and lyrically, with very similar riffs and drum beats alongside uncreative words. Overall, the album does focus on Christians purposefully trying to reach out to others which is good, and if you're into the radio-style rock band sound, this may be exactly what you're looking for. If not, you won't find much else here and may want to pass on this one. - Kevin Hoskins, 8/22/13