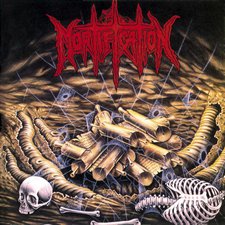 Mortification
Scrolls of the Megilloth


Mortification was a pioneer of Christian metal beginning in the early 90's. These Australian metallers led by frontman and bassist Steve Rowe had a career which spanned over 20 years, bringing a much needed Christian witness to the burgeoning death metal scene. Their pinnacle album, Scrolls of the Megilloth, had a massive influence on bands such as Living Sacrifice, and Becoming The Archetype. The latter's first album bears the name of the brutal track "Terminate Damnation" featured here.

So why write a review of an album almost 30 years old? Well, good music doesn't have an expiration date, and I repeatedly find myself going back to Scrolls, not just for the metal (which has held up surprisingly well over the years), but also for the spiritually encouraging lyrics.

The album begins with the fantastic opener, "Nocturnal." The drums fade in slowly to the sounds of the night; crickets, owls, wolves, etc. A guitar riff joins in, and a loud blast leads you on your way to this death metal feast. This song speaks about Mortification's purpose, which is to be an influence for Christ in the darkest of places. "Nocturnal, creatures of the night...Eradicate effects of demon power, bind the grip of death upon the soul, infiltrate the words of hope and faith to the lost, bringing Jesus."

Metal music has always been a perfect vessel to hold some of the weightiest topics of the human experience. This is even more true for the Christian. Scrolls tackles such heavy topics such as eternal suffering ("Eternal Lamentation"), the occult ("Necromanicide"), cancer ("Lymphosarcoma"), funerals ("Death Requiem") and of course, our Lord's passion ("Ancient Prophecy"). These themes provide a fitting backdrop for Steve and Co's intelligent, straightforward, and biblical lyrics. The title track is about the five books of the Old Testament known as the Megilloth. Each verse speaks of one of the five books, which include Song of Solomon, Ruth, Esther, Lamentations, and Ecclesiastes. This song showcases Mort's unique ability to blend in catchy, almost sing-along choruses to the death metal frenzy.

Musically, Scrolls never strays too far away from classic death metal characteristics. Rapid fire guitar riffs, low death metal growls, and blast beats are the name of the game here, although Mort is not afraid to slow things down. One thing that sets Mortification apart from other bands in this genre is the ever present bass guitar, and in a few sparkling moments, the bass shines all by itself. A few song-appropriate breaks do provide a bit of a respite from the metal onslaught. "Death Requiem" features a spoken word funeral eulogy, "Lymphosarcoma" includes sounds from a hospital room (this song would prove to be a foreshadowing as Steve would have to fight his own battle with cancer just a few years after this album's release), and the epic closer "Ancient Prophecy" uses a growled passage from Isaiah 53. These additions help make the songs stand out from one another, thus avoiding the all-too-common "all the songs sound the same" critique, though there's not much in the way of guitar solos or melodies which would have added more variety to the overall listening experience.

When all is said and done, Scrolls of the Megilloth is a landmark album in the history of Christian metal, and is still a good listen today. If you're into metal, do yourself a favor and go back to where Christian death metal all began, you may just find encouragement within the brutality.

A Message from Steve Rowe about the Album Cover:
"Last year, I studied at Bible college for a year and one subject I took was Old Testament survey. I realized when studying the books of the Old Testament that I had probably never even read some of them, especially the books of the Megilloth. When we read 2 Timothy 3:16, we realize that all Scripture is there for a purpose and should all be studied to guide us. The album cover depicts the Megilloth in a cave covered in cobwebs because it is never read by some. The skeleton is symbolic of many people whose spiritual lives are partly dead because they haven't received instruction from the entire Word of God."