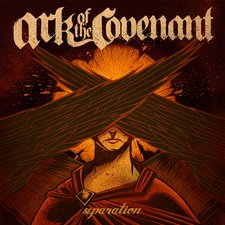 Ark of the Covenant
Separation EP

Strike First's Connecticut quartet Ark of the Covenant has made the label proud of their new Separation EP. It's a five-track hardcore project but somehow feels more like three. The first intro track is only a little over a minute, while the last one, "Separated," is mostly spoken and not sung. It feels more like a poem--albeit a good one--and not an actual song. That's not a major thing to fuss over, however, because this is only an EP, and isn't meant to have a long lasting appeal. The songs on Separation do just enough to give the listener a taste of what the band is capable of. And at that, they succeed safely.

The intro track isn't good enough to be a highlight, and while the EP can stand without it, it does add a nice touch to set the tone for the rest of the songs. Next is "The Book of Life," and after hearing it, you should already be able to tell that you're in for a treat. It's exceptionally catchy for hardcore music and the riffs are memorable and creative. I've always found it important for a song to have something memorable about it, something that makes the listener think: "I can't wait for that part of the song to come." Each song on this EP has that, which is what stuck out to me immediately after listening. "All The Inhabitants of the Earth" follows the same trend, shooting choppy riffs and catchy vocals. "Locusts Look Like Horses" is the last actual song on the album, preceding the poem track that ends with a nice praise to God. It suprisingly sounds like something that could be played at a church, which also speaks of the band's versatility. I'd love to see that diversity explored more on their full-length album. The lyrics on all these songs are clearly for Jesus and His people (though you might want to read the lyrics yourself to be sure of that), which is also refreshing to know.

All in all, Separation EP is absolutely worth at least a couple listens to any fan of the genre. It's a great start for the band and I for one am excited to see what they have in store on their first full-length album.

I often feel like Strike First newcomers are being thrown a bone, but Ark of the Covenant really knew how to work the crowd, so to speak, with their debut EP, Separation. What first seems like unpolished dribble soon becomes a clear attempt at getting your juices flowing. And does it ever! Upon initial listen, I thought, "Where is this going?" But after getting my ear holes pounded by "The Book of Life," I realized there really are no misses here. The drums sound great, right on the mark, the vocals are so satisfyingly dirty I got goosebumps, and the constant barrage of ugly chords may not be for everyone, but to the right listener (i.e. me) they sing sweet, hair-raising music. It sounds almost as if they're holding back a bit. There's no absence of appropriate talent in what is really not an ambitious project. The energy climaxes in "Locust Look Like Horses," where the hardcore spirit truly comes out, but only briefly. The passion is built up and then lands you flat on your face in a cool-down outro track in the shape of a spoken word worship song, showcasing their musical diversity as well as their beliefs. The ride is short, but it plays out like a prelude to something way bigger. And honestly, I'm itching to hear more. - Wayne Reimer, 5/9/11