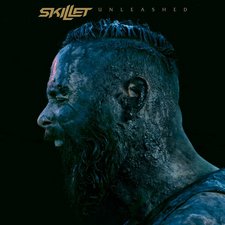 By this point, Skillet is becoming a household name in Christian rock circles, and they are approaching that territory in the mainstream. In a world where selling tons of albums is getting harder and harder by the year, Skillet has managed to reach Platinum status with two albums and Gold with one. This fact alone gives them a legitimate case to the claim that they may possibly be one of the most popular rock bands in the world. But their success has drawn out a variety of criticisms; many are unfairly condescending due to the ever-scorned "Christian Rock" label, while others merely legitimately point out the derivative nature of Skillet's style. But at this point, Skillet has settled into their groove. They are what they are, both the good and the bad. Coming off of the ambitious (and newly-Gold christened) concept album in Rise, and before that the ballad-heavy Awake, John Cooper and company have vowed to give the fans the "very-aggressive, in-your-face" rock that has been missed by many.

Enter Unleashed. The title is appropriate for several reasons, not the least of which being the progression of titles fans have noticed (Collide, then Comatose, then Awake, then Rise, and now Unleashed) that the band has chalked up to coincidence (at least that is what they said when Rise came out). But it is also appropriate because Skillet truly is more up-front and aggressive on this album than they have been in a while, which alone may win back many fans that haven't been thrilled with Skillet's output since Collide. Both the opening tracks present Skillet with rock songs that are of this aggressive, in-your-face variety; "Feel Invincible" may transport some fans back to the band's early-2000's era thanks to its electronic undertones, but it also features some hard guitar licks that Skillet simply hasn't been known for. "Back From The Dead" is another song that doesn't quite feel like typical Skillet output (I've heard some compare it to "Monster," but I don't buy that comparison), and I would classify it as a genuine "fun rock" track. "Stars" follows to slow things down a bit with an explicit worship track. I can't be the only one that is reminded of Hillsong's "Oceans" when I hear the hook and first verse (Cooper even says the word "oceans!"), but despite that, "Stars" has enough lyrical power to elevate it to the third consecutive highlight to open up the album.

Unfortunately, Unleashed has already reached its highest point. Starting with "I Want To Live," the album struggles much more than what you would expect with such a strong opening. Essentially, "I Want To Live" is a paint-by-numbers Skillet track that, musically, is basically the hook of "Rebirthing" with the chorus of "Awake And Alive" with bland lyrics. It literally brings all the great momentum the album had going for it to a screeching halt. "Undefeated" attempts to get the momentum starting again, but it only partially succeeds (the elements of the song that are successful are the same ones that made "Back from the Dead" successful, so it feels derivative). "Famous" is Skillet's attempt at a dance-pop track, and it also is a song of mixed-success, while "Lions" follows with another screeching halt as Skillet attempts to tap into the mainstream CCM market with a song that feels manufactured for the sole purpose of being played on K-LOVE.

"Out Of Hell" finally brings things back on track as the best song of the bunch, and one of Skillet's best songs of all time (in my own humble opinion). It is the first time possibly since Collide that Skillet has managed to create a great marriage between strong, Christ-focused lyrics and a driving, aggressive hard rock song. "Burn It Down" keeps the momentum up pretty well, before "Watching For Comets" resurrects the Awake-era love ballad. Finally, "Saviors Of The World" (due to a lyrical issue) and "The Resistance" (another paint-by-numbers Skillet track) end the album on, unfortunately, a fairly down note (sans a bizarre, but entertaining, guitar solo to finish everything up).

There is a lot to be said about the lyrics to Unleashed--some good, some harmless, but too much simply poor. The two worst offenders of the album are without a doubt "Lions" and "Saviors Of The World." "Lions" finds itself included thanks to its facepalm-inducing, churchy, self-empower-y clichés that make up the whole song ("if we're going to fly, we fly like eagles" or "if we're going to fear, we fear no evil" or "if we're going to stand we stand as giants," etc...), but "Saviors of the World" is mentioned for a more nuanced reason. Strictly speaking, there is only one word out of place, but it is a big one (in the title, in fact). The chorus goes, "We are the saviors of the world / And I will not be ruled / We are kings and conquerors / And I won't bow to you." The word "saviors" is very ill-chosen, because the implication is that we, that is, you and I and our brothers and sisters in Christ, are the "saviors" of the world. There is obviously a very serious theological problem here, as Jesus is the world's only Savior. From the context of the rest of the chorus, I get what Cooper is trying to say; when we are in Christ, we can resist the forces of the world that are against us (the idea rooted in Romans 8:31-39). And we need only replace the word "saviors" with another word ("light-bearers" maybe?) to erase that problem and keep that message. With such an easy fix, this should not have been an issue, but unfortunately it is.

Aside from that, the other issue with the lyrics is that most songs fall under the category of what I like to call "pump-up tracks." These are the songs with superficially encouraging, empowering lyrics akin to what one might hear in a weight room or listen to before an athletic competition. The most obvious example here being the chorus to "Undefeated" ("I came to fight for the love of the game / Unstoppable / That's why I, I'm undefeated / Off the leash out of the cage / An animal / That's why I, I'm undefeated"), but there are numerous other examples ("Feel Invincible," "I Want To Live," "Lions," "Saviors Of The World," "The Resistance" are some others). This lack of depth drags the album down like an anchor and obscures the good other good messages within the album. On the other side of the coin, several songs do have legitimately strong content, the most obvious being the agonized prayer of "Out Of Hell," but "Stars," "Famous," and "Watching For Comets" also deserve a positive mention.

Like Rise, Unleashed is an album that really is all over the place both musically and lyrically, but more so than Rise, Unleashed has several legitimate shining moments. "Out Of Hell" is the must-listen on the album, and several others, as I've mentioned above, are good listens as well. As a whole album, it might be a little too disjointed for a "sit-down-and-listen-through" approach, and may not hold up well with replays. But I would say that most Skillet fans probably won't be disappointed with Unleashed. Newer fans will certainly love it, while more longtime panheads will be harder to win over. But it is possible. Overall, while a mixed bag of an album, it does its duty.

It's been 20 years since Skillet released their self-titled debut on Ardent Records. The days of the grungy, hard rocking Skillet have long past. These days, the band is known for their symphonic rock sound instead. In 2013, the band attempted a concept album with the release of Rise, but it fell flat with many fans. After a 3-year break, John Cooper and company have returned with Unleashed. The album finds the band flirting with breaking out of their comfortable symphonic rock mold, but unfortunately, it's only some pretty mild flirtation. Songs like "Feel Invincible," "Famous" and "Burn It Down" toy with the industrial type sound Skillet embodied during the Hey You, I Love Your Soul and Invincible era of their career. However, "Back From the Dead," "Stars," "I Want to Live" and "Watching For Comets" sound EXACTLY like what you think Skillet would sound like after their past several albums. A couple of the best tracks present are "Out of Hell" and "The Resistance." While there isn't a ton that is extraordinarily memorable, "Saviors of the World" is memorable for the wrong reasons. It's unclear if the lyrics are making reference to the Great Commission, or something else, but the chorus finds Cooper singing, "We are the saviors of the world and I will not be moved. We are kings and conquerors and I won't bow to you. They will not control us anymore. We will not conform, No!, anymore. We are the saviors of the world." While I don't think it was the intent of the song, the lyrics seem to point a lot more to "I" and "we" and not towards the true Savior of the world, Jesus Christ. There is no questioning the faith of the members of this band, but this particular song just doesn't sit right. I had truly hoping for a Skillet revival in their 20th year, and there is certainly some enjoyment to be found in Unleashed, but instead album number nine just offers more of the same. More recent fans that have loved the last several records, however, will undoubtedly enjoy this one just as much. - 7/28/16, Michael Weaver of Jesusfreakhideout.com

Skillet is one of my favorite rock bands of all time, and for any band that stands the test of 20 years, they must be doing something right. Now, some would say that each album sounds very similar and the creativity is lacking from album to album, and while I would agree, the symphonic rock sound of Skillet is one that I have yet to grow weary of. The rock veterans can definitely rock hard and tracks here such as "Feel Invincible," "Back From The Dead" and "Undefeated" display that rocking panhead sound that fans have come to enjoy. As always, a few softer tunes for the feelers, "Stars" for example, are included, making Unleashed a standard Skillet record. Of course, not every track is great, and this is not the most comprehensive album you will hear this year, but it's on point as far as what fans have come to love and expect from Skillet. If you've enjoyed the test of time that Skillet has endured, then you are going to appreciate what Unleashed has to offer. - 7/5/16, Kevin Hoskins

Skillet's ninth studio album, Unleashed, starts off well enough with the anthemic "Feel Invincible," the gritty rocker "Back from the Dead," and the worshipful CCM tune "Stars," but only the Newsboys-styled "Famous" and the catchy "Burn It Down" offer memorable listens past these first three tracks. Most other songs have some kind of major weakness, whether it be hackneyed themes ("Undefeated"), recycled musical backdrops ("I Want to Live"), generic lyrics ("Lions") and even some shaky theology ("Saviors of the World"). These imperfections are masked by strong hooks and John Cooper's signature vocals on the first few listens, but in the end, Unleashed leaves an underwhelming impression. - 7/13/16, Christopher Smith