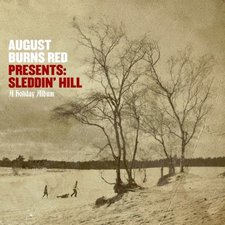 August Burns Red is a band who has graced us with a few rocking Christmas instrumentals in recent years. After releasing what could easily be considered their career best, Leveler, last year, the boys are back and giving Jake Luhrs' vocal chords a rest. ABR has put together their first full-length Christmas record which includes re-mastered versions of the previous releases "God Rest Ye Merry Gentlemen," "Little Drummer Boy" and "O Come, O Come Emmanuel," as well as a revised version of "Carol of the Bells." Anyone who was a fan of these releases will be thrilled with August Burns Red Presents: Sleddin' Hill, A Holiday Album.

ABR brings a lot more to the table than the hardcore/metalcore they typically play. More pointedly, a much stronger punk vibe oozes throughout many of the songs. As a whole, the album contains eleven traditional Christmas favorites along with two completely original instrumentals. The classics come across feeling just that way. The punk guitars and metal breakdowns are background to the shredding solo guitar work playing the melody of each song. The most positive aspect to the entire record is that just playing rocking versions of old songs isn't enough. The technically proficient band shows some of their most creative work to date as they intertwine different influences together on each track to make each song truly memorable. This can be seen best when you take a listen to "Sleigh Ride;" the song blends many different genres together and does so flawlessly. It starts off with a slow rocking feel before picking up to a blinding punk pace. The most surprising part is the piano/jazz interlude squeezed between the aforementioned punk section and the following metal breakdown. The song then goes full-on "MxPx" as it leads into the closing. The track alone makes the record completely worthwhile. While songs like this are about as perfect as you can get, songs like "Frosty the Snowman" and "God Rest Ye Merry Gentlemen" almost go a little too far with blast beats and typical ABR fanfare to be completely enjoyable as Christmas songs and hurt the replay value of them for the holiday season. Thankfully, these occasions are few and far between. The last note on the classics would be for "Rudolph the Red Nosed Reindeer;" the only track featuring vocals. "Rudolph" has always been one of the most fun Christmas songs to sing and the band feels that as they approach with gang vocals--including the additional childhood lyrics such as "like a light bulb" directly after the line "Rudolph the red nosed reindeer had a very shiny nose." The only weird thing about the track is that the vocals are subdued. The instrumentation takes center stage and the vocal tracks almost feel like they were left in accidentally.

The two original tracks, "Flurries" and "Sleddin' Hill," both feel completely new and yet somehow vaguely familiar all at the same time. Each track screams Christmas in its own way. "Flurries" fits right in with the style of the rest of the album and really brings the Christmas feel home during the breakdown as the bells begin chiming. "Sleddin' Hill" seems more traditional in a different way and stands out on the album because of the instrumentation. Acoustic guitar, banjo, and fiddle take center stage on this track that really has a real American Christmas vibe, but just for good measure, the distorted guitars are brought in at the song's close. The album's title track works nicely to break up the record's sound.

This is a must-have for ABR fans and something Christmas music fans in general are going to want to check out. If you aren't a fan of metal, don't let the fact that this is an August Burns Red album deter you. Yes, there are a few heavier sections in the album, but the majority is fun-loving Christmas instrumentals you'll want to spin over and over again. When I first saw ABR was releasing a Christmas album I was stoked and hoped it was instrumental. To be honest, this album was everything I hoped for and a little more. Sleddin' Hill is definitely worthy of being in your normal Christmas rotation this and every holiday season.

With the exception of excellent "Carol Of The Bells," I've never purposely listened to August Burns Red. However, no album in 2012 has made me smile like August Burns Red Presents: Sleddin' Hill, A Holiday Album. Outside "Rudolph The Red Nosed Reindeer," the Christmas album is entirely instrumental. Throughout the thirteen track project, the band manages to beautifully balance both their furious guitars and a classical instrumental sound in a remarkably Christmassy atmosphere.

ABR isn't the first group to cover "Carol Of The Bells" with epic results, but the way they transition their skill to the rest of the album is outstanding. Their handling of "Frosty The Snowman," Sleigh Ride," and delicious closer "We Wish You A Merry Christmas" is terrific. When it comes to the classic hymns, ABR churns out especially hard performances which include a masterful guitar interlude in "God Rest Ye Merry Gentlemen." Their two original songs are smart and offer an uncompromised Christmas sound particularly in the opener, "Flurries."

One potential caution is replay value. Although I'd recommend this album to virtually everyone, it may have greater lasting effect in the hands of metal fans than modern pop/rock enthusiasts. That aside, Sleddin' Hill is one of the most enjoyable Christmas albums I've ever heard, and I now plan on spinning August Burns Red for many Christmas seasons to come. - Nathaniel Schexnayder, 10/8/12