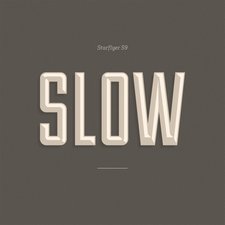 
For those who are unfamiliar with the legacy that Starflyer 59 has left behind, Jason Martin has lead the genre-bending, Riverside-based rock group since 1993. Martin first made waves among music lovers for his unique take on shoegaze, a genre that was being popularized in certain circles by the Irish rock band My Bloody Valentine. Managing to stand out among numerous copycats by allowing their own artistic vision to pierce through and innovate the scene, the beloved rock group looked towards setting up camp among a more indie-rock approach in the vein of the Smiths, as seen on albums like The Fashion Focus. Although the Tooth and Nail label had been distributing much of Martin's material for years up to that point, the two eventually called it quits, leaving 2013's crowdfunded IAMACEO to be the first independently released album under the Starflyer 59 name.

Three years later and here we are, the threading point of Slow and what could be a huge indicator of Jason's remaining potential after 14 studio albums and numerous EPs. Fans can rest assured that the high quality of Martin's music has not diminished in any way at all. Every instrument and note has been professionally executed and captured with production that will easily please anyone who has been following this band while gathering new recruits with an ear for detail.

What's more, some tracks even see the return of Martin's more heavier side. "Runaround" and "Hi Low" especially make use of a grittier, distortion-reliant groove that nod towards their roots while the title track and "Wrongtime" dish us flavors we've come to grow attached to from the softer side of Jason.

Lyrically, most of the themes on Slow deal with nostalgia, the confrontation of the passing of time, and family. I won't go into detail as the content is pretty straight-forward in terms of delivery, but I will say that it's refreshing to see an artist allow their audience to see a bit into their life and the perspective they've adopted.

I wish I could say something bad about this album, I truly do. A critic's job is not to indulge in the interest of the artist or their fans but for the art itself, yet Slow makes no fault at all. It's not solely dependent on one side of Starflyer 59's many colorful faces, but rather, it allows us to see them all with balance. Sure, it doesn't reinvent the band to catapult them into the glory days of their metallic albums, but it does well what it sought out to do. In a time where indie rock is stagnating compared to the growth it saw in the first decade of the millennium, Martin reminds me that not only is there hope for the genre, but more importantly, for Starflyer 59 itself.

Jason Martin's Starflyer 59 has been a staple in the Christian rock scene since the mid-90's (with Silver releasing in 1994). It's been three years now since the release of IAMACEO and the announcement of Slow definitely got fans excited. While I wouldn't necessarily classify Slow as "shoegaze," it definitely harkens back to those days a little more than other recent works. The album itself is relatively short with only eight tracks and a total runtime under thirty-two minutes. However, held within that time span are some really solid numbers. "Hi Low" and "Runaround" are excellent songs that perhaps feature the strongest presence of the shoegaze sound. "Wrongtime" carries an 80's vibe that is reminiscent of The Cure's "Lovesong," and "Retired" and "Numb" are simply two of the best overall songs on the album -- especially the more reflective and somewhat humorous "Retired." Martin sings, "I used to be the MVP / I used to be the center of the scene / I used to be the funny one / I used to be the setting sun / It's tough to be retired when there's so much left to give, but there's so much less to live / It's tough to be retired." Slow isn't anything mind-blowing, but it is certainly a solid addition to this band's already impressive discography. Long-times fans should certainly find satisfaction here. As one who has been listening to Starflyer off-and-on since first hearing "Hazel Would" (from Silver), Slow will unquestionably find its way into my musical rotation for some time to come. Hopefully the song "Retired" doesn't actually reflect Jason Martin's plans after this album; he most certainly has "so much left to give." - Review date: 6/15/16, Michael Weaver

Starflyer 59 is quite simply a treasure of a band. While they won't ever really do anything unexpected, they will always meet or exceed expectations, as their latest album shows. Slow is definitely as much a meditation on the various past incarnations of the band's sounds as it is a lyrical musing on being middle-aged, but the sonic callbacks don't distract from the final project as a standalone work of art. It is clearly the product of a mind (that is, Jason Martin's mind) that neither takes his craft too seriously, nor belittles it in any way. And that makes it a highly refreshing, highly enjoyable (and even thoughtful) listen. While having familiarity with Starflyer's past will make it easier to appreciate all Slow has to offer (since it is such a retrospective album), no new fan would really miss a beat jumping headfirst into the veteran band's 14th studio project. - 6/16/16, Mark Rice of Jesusfreakhideout.com

Jason Martin certainly hasn't been lazing about since 2012's IAMACEO (see his 2015 album with Ryan Clark under the name Low & Behold), but Starflyer 59 has taken a backseat for a while. Returning to Tooth & Nail Records, Slow is evidence that Starflyer is still Martin's baby. Starflyer's sound has evolved a lot over its 20+ year existence, but Slow is similar to the last few albums he's released. The title track lives up to its name, taking its time to complete, but it picks up quite a bit for "Told Me So." This track is perhaps my favorite of the bunch, and reminds me a little of his 2008 album Dial M. I also really like the rhythm of "Wrongtime." The bassline will get stuck in your head, and the furious acoustic guitar in the background complements it well. "Cherokee" is one of the most interesting tracks here, taking influence from all over the place (David Bowie, Depeche Mode, Silversun Pickups, Nine Inch Nails, The Violent Femmes). The short tracklist was a bit of a surprise, but Starflyer 59's tendency to release music at an accelerated rate more than makes up for it. Slow is a solid way to return from a short break. - 6/17/16, Scott Fryberger of Jesusfreakhideout.com