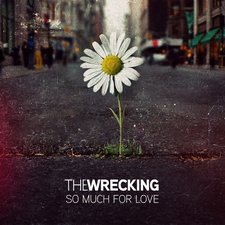 The Wrecking
So Much For Love

With accomplished bands such as Downhere, Jaymes Reunion, and Me In Motion fading from the picture, the inherent need for excellent pop rock is at an all-time high, especially with an unfortunate low-quality standard in place. Even though The Wrecking has been around since 2007, it's only been recently that they've put their best foot forward. For clarifying background information, the fact that So Much For Love is finally released is astonishing in itself; delayed for months and months, The Wrecking has filled in the gaps with various EPs in the meantime. But with a limited release last February, this August finds the fourteen track project So Much For Love getting the grand release it deserves.

In some ways, the pop rock value for this record can sometimes give the illusion of a stereotypical "Christian rock" sound, and the first couple listens don't do much to derail this first impression. By the end of the fourteen tracks, there's an ever-so-slight hint of formulism; there's always a catchy chorus at just the right time, the vocals sound just right for the each song's mood, and the band doesn't deviate much at all from the tried-and-true general structure of "verse-chorus-verse-chorus-bridge-chorus." Judging purely from the singles "Tidal Wave" and "View From the Top," the quartet's collegiate enthusiasm is believable, but a little lacking in succulent, long-lasting flavor. In some ways, these elementary elements are all essential to the genre, as it does put the "pop" in pop rock, but from the sound of some of these melodies contained therein, there's more talent and dexterity to The Wrecking than they are letting on.

That being said, So Much For Love is still a particularly strong album for the field. The electronic elements scattered throughout the record are pretty novel and don't feel gimmicky, and most every track does lyrically contain more conviction and depth than most pop rock songs, and those areas are where The Wrecking brings an advantage to the table. Though it takes time to appreciate them, astute lines such as "sometimes a prince and a king wear the very same crown" ("Glorious") or "we'll always be fighting for something/why can't we let it be love?" ("Fighting For Something") show a level of keen observation that each listen uncovers more and more of. Seemingly in contrast to the last statement, a track such as the single "Tidal Wave" can at first seems to employ truly odd lyrical methods (comparing God's love to a natural disaster is a bit of a stretch, even if they aren't opting for the scientifically-correct "tsunami"), but there's a level of endearing awe surrounding the track that truly feels worshipful and less canned than otherwise. Lead singer Doug Elder is truly an asset to completing The Wrecking's sound; his voice is meant for this kind of music, and he exercises it diligently with high and low notes, taking risks that pay off remarkably. Best of all, his voice lends credibility to his heartfelt songwriting, and that helps the band stand out from the pack.

As far as a pop rock venture, The Wrecking has continued to set a relatively high standard for the genre with So Much For Love, and it's good clean fun all the way around that's a little hard to argue with. Certainly much further along than from their 2007 A New Abolition, The Wrecking has quite a bit of appeal attached to their approach, even if not every track leaps out of the norm, and most will find something to like about So Much For Love's efforts. Hopefully listeners won't have to wait as long for The Wrecking's next release, as they're certainly one of the better pop rock bands active in the circuit, and that doesn't look to change anytime soon.

- 8/19/12, written by Roger Gelwicks of Jesusfreakhideout.com

After releasing a couple of EPs in the interim, The Wrecking have returned with their second full-length album. So Much for Love begins with an appropriate introduction, "Fire," which talks about a relationship that continues to grow as a Christian. The second track, "Let Everything Sing," echoes a chorus that will be imprinted into the listener's mind with a simplistic, yet effective, cadence that takes a passage from Psalm 150:6 ("Let everything that has breath praise the Lord!"). The album never seems to hold back (with the exception of "Our Feet Don't Touch the Ground") and continues to remain consistent with songs people can easily associate with, like "Gravity" (limitless love with God) and "Antidote," which advocates for people to rely on God when having to go through all matters in life: "don't you know / you're my antidote / you're my only hope / the only one I'll ever need." It has been noted that the band has "musical references as diverse as Radiohead, Jimmy Eat World, The Daylights and Onerepublic," although they appear to have originated a sound that seems to remain all their own. Listeners will have no difficulty finding spiritual content, especially with songs like "Glorious," which talks about the appreciation for the commitment and love that Emmanuel (God) has provided to them. "Life in Reverse," which recalls making a comeback in a person's life, is one of the highlights and has a really exceptional intensity of keyboards and guitars. "Symphony of the Broken Hearted" would have been a preferred album conclusion as it just sparks that "album closer" feel and it even focuses on the "beautiful sound / a melody that changes all of us." While the album has its moments where choruses can become very repetitive ("About to Fall"), it does offer a very nice balance of songs ranging from highly motivated songs ("Electricity," "Fire") to the more graceful tunes ("Glorious," "Our Feet Don't Touch the Ground"). The Wrecking has provided a welcome collection of songs that are an enjoyment to listen to which should generate new fans (like this reviewer), and should easily satisfy fans of bands like The Afters and Sanctus Real. - Wayne Myatt, 8/19/12