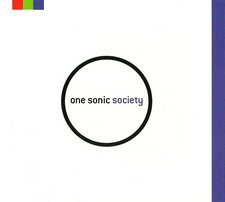 The Society EP is the third in a series of cleverly titled EP's from One Sonic Society, the musical collaboration between guitarist Stu G (of the now sadly defunct British worship band Delirious?) vocalist and long-time Christian music producer Jason Ingram (Sonic Flood, Rebecca St. James) and Hillsong drummer Paul Mabury (The other two being titled One and Sonic).

The Society EP comes out swinging with "Beautiful Savior," which, while I believe it shares its title with a few other worship songs of recent years, is still an impressive piece of songwriting and performance, given an added sense of heft by the clever use of moody synthesizers that are reminiscent of The Killers or The Violet Burning.

Followed by the equally arena worthy song "Always," One Sonic Society shows right away their continued deftness with a hook and melody. This is an impressive first couple of at-bats, and the remaining three songs of the EP follow the same anthemic structure while successfully mining the Psalms lyrically and sustaining the overall mood of the project, which appears to be reflection.

The modern worship song faces the difficult task of straddling the fence between being a creative and unique offering to the Lord and still being useful for corporate worship settings. There are plenty of praise and worship songs that have nifty time signature changes or crafty bridges but that are actually difficult for the average Joe to sing. Likewise, there are plenty of three chord rehashes that are immediately singable, yet offer nothing that could be called "a new song."

To that end, I found myself admiring the construction of the songs on this EP, yet still singing along by the third verse. One Sonic Society clearly is a collaboration of songwriting veterans, and following offerings will, I hope, attempt to branch out a bit from the sturdy songs represented here into the infinitely wide open art form of music.

But if the overall goal of this project is to move the listener into a reflective place of personal time with the Lord, then it's a job well done.