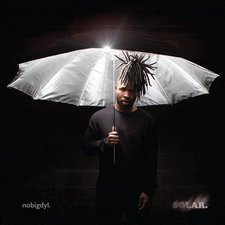 
Dylan Alexander Phillips, Murfreesboro's finest, a former road manager of Derek Minor's Reflection Music Group, and the rapper also known as nobigdyl., is back with SOLAR. which has been described as a sequel to 2017's Canopy. Recently signed to Capitol CMG, dyl dropped a teaser to showcase what SOLAR. is all about, and one can clearly get the powerful and moving message that this album is aiming to bring. Spoiler alert: the trailer hit the nail on the head as this is one of the best rap albums you will hear this year.

SOLAR. kicks off with "Anime," where dyl spits fire over solid production in a good kickoff track before "Block Me Back" comes on and gets a little personal as it hits on infidelity in relationships. Specifically, the texting side of infidelity and the trust issues that can result. It lays the foundation of his willingness to make his heart an open book throughout the album. "Bad Motives" carries a unique production to perk the ears of beat lovers, and "Cordial" showcases a slower, more chill vibe in a song hitting home with the encouragement to keep moving forward and forget the past. Lyrics such as "why my past keep holding my hand?" drive home the point dyl is trying to make while touching on the reality of regret that most of us can relate to. Then "Twenty Eighteen" comes along with lyrical honesty as the artist spits "I can see you wylin on the internet. 'Only God can judge', but do you wanna see Him litigate?"

"Pressure" focuses on dealing with the problems of society. Even though I dig "Pressure," I do wish that in a song featuring the likes of John Givez, that we would have heard at least a few bars from the rapper. Speaking of good features, fellow Indie Tribe member and new Reach artist WHATUPRG teams up with nobigdyl on "Be A Man." Although the hook is a bit too repetitive, the track carries tight beats and RG and dyl flow perfectly together in this banger about stepping up and representing Jesus.

"Psycho Heart!" is a perfectly titled track, and "Shadow" once again lets us into the life of nobigdyl. "Shadow" is a two-part track with the first half delivering what a godly husband ought to be, and the second half focusing on the failures that tend to creep back in too often, all while giving us a biblical reminder of our true value and worth in God's eyes. "Close" starts off "we were best friends up until I had to give confessions," letting the listener know immediately that this is an extremely powerful and moving message of the pain that marriages sometimes have to face. Sticking together, focusing on biblical truths, and the humility and gratitude of having a spouse that chooses you despite your imperfections comprise the message of the track. "Close" concludes with the ultimate sacrificial love of Jesus for our sins. It is a very raw and intimate track that opens us to dyl's darker moments and the redemption that we can all have in Christ. The final track on this listing is "Enemies?" which has been released as a single and is your perfectly signature nobigdyl track. Produced by Dirty Rice, the rapper speaks about bringing positivity into this world and loving others. Being a godly representation is something that dyl often tries to communicate and he does so in an awesome way, rhyming "listen, this is important, this is do or die. Love your fellow man and give em more life." In a culture that often provokes violence, nobigdyl communicates a wonderful message of peace and love.

In the end, SOLAR. is easily one of the, if not the, best hip hop albums of 2018 so far. The beats are off the chain and dyl spits fire throughout the entire twelve-track ensemble, all while hitting deep on how to handle relationships, the struggles that come with life, and knowing our real value and purpose in this life. Fans of nobigdyl and hip hop heads alike will wanna jump on copping this as soon as you can. You know, for a guy who humbly labels himself as not a big deal, nobigdyl is proving to be someone who will be in the CHH game for a long time.

Last year, nobigdyl. impressed a lot of people with his first full-length album, Canopy, myself included. He even caught the ears of the folks at Capitol CMG, who signed to him and have now partnered with dyl for his new release, SOLAR. A "part two" of sorts in relation to Canopy, dyl makes plenty of callbacks to his 2017 offering, bridging the gap between the two. SOLAR. brings another dose of modern-sounding rap, mixing bits of trap, hip hop, and pop music with excellent lyricism and very catchy melodies. Though the trap flows sound like a cut-and-paste of most other trap songs, with triplets galore, there are thankfully a couple of instances of them, and they work in the context of the album. Some of my favorite parts are the more melodious sections, like the singing in "bad motives" and "psycho heart!" - those hooks will get stuck in your head for days. It's hard to say whether SOLAR. is better than Canopy, but I don't really think it's relevant. With that being said, SOLAR. is definitely one of the best rap albums of the year thus far, on par with the latest from Jackie Hill Perry and Andy Mineo. You'll want to add this to your collection. - 6/17/18, Scott Fryberger of Jesusfreakhideout.com