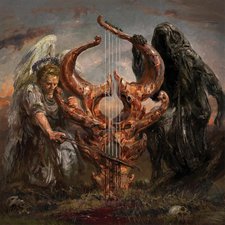 
In an era where bands trade in arenas for living rooms and swap electric guitars for acoustic ones, Demon Hunter has released an acoustic jam of their own. Instead of repackaging previously-released bonus tracks, Songs of Death and Resurrection features stripped-down recordings of songs like "My Throat is an Open Grave" and "My Heartstrings Come Undone." And even though the growling guitars (and the growl from Ryan Clark's throat) are absent here, the band still manages to bring conviction and honesty to these songs.

Death and Resurrection begins with a piano-centered version of "Open Grave." It's definitely a more cinematic take on the haunting ballad from the band's debut, with an extended intro and a string section. "Dead Flowers" has a similar arrangement, with piano, strings and Timothy Watts' in-your-face snare, as well as some great acoustic guitar shredding.

Compared to the hauntingly beautiful tracks before it, "Heart of a Graveyard" is not the strongest track, neither here nor on 2014's Extremist. This version, instead of pushing the envelope, is more of the same, and tends to bog the album down. Fortunately, "Praise the Void," the only new track on Death and Resurrection, is one of the strongest ballads from the band in recent years. The string arrangement and Clark's voice are so beautiful and emotive that we're drawn in, even if we don't know what the lyrics specifically mean. In any case, a void is empty space, so Clark is sarcastic when he sings, "now we praise the void / for this love / wasted love." Given the context, the lyrics suggest that we have turned from God to worship our own emptiness. Whether or not these words are general or a commentary on what the world's been through over the past year, we can relate to the isolation expressed in this song. This is especially true of the line, "here in the dark / I feel nothing / I see no one."

The acoustic renditions of "Blood in the Tears" and "Loneliness" may be straightforward, but the former track is a watered-down version of the moody closer from The World is a Thorn. This reworked "Blood in the Tears" pairs well with "Praise the Void," though Clark's performance isn't nearly as vulnerable. His choice to stay in one octave gives this version a chill vibe that makes sense with the acoustic instruments. Still, the contrast between the lethargic verses and the go-for-broke chorus is what made the original song interesting. With that dynamic missing, this recording feels flat and leaves us wanting more. "Loneliness" does a lot better job drawing us in with subtle yet effective changes, such as a harpsichord, strings and piano. Ryan Clark's baritone is as rich as ever and might, along with the strings and overall haunting tone, remind some old-school metal fans of "Silent Lucidity" by Queensryche.

"Loneliness" and "I Will Fail You" both have a cinematic quality that fits well with the introspective lyrics, but the reworked version of "I am a Stone" interrupts the flow. This no-frills take on the bonus track from True Defiance doesn't do much except detract from the eerie slow burn of the other songs. It doesn't feel particularly sad or angry, nor does it have the pretty string section of the original. It's just there, and is one of the few times this reviewer has been bored by a Demon Hunter song.

Thankfully, the slow burn continues to scorch with the layered, hypnotic acoustic guitars, soaring strings and pounding drums of "I Will Fail You." "Deteriorate," on the other hand, takes a minimalistic approach, with Clark's vocals backed only by a piano for most of the song. Sometimes we might forget how sincere his clean vocals can be, but they really shine through on this track.

Like "Blood in the Tears," the acoustic "Carry Me Down" plays it safe as Clark's vocals are dialed back to fit with the instruments. Again, this decision is understandable, but in this case, it results in a song that seems much less in touch with its own lyrics.

Despite some rocky moments, the final tracks, "The Tide Began to Rise" and "My Heartstrings Come Undone," give Songs of Death and Resurrection a solid ending. This take on "Tide" is pretty similar to the original Tryptic version, though the song was so good to begin with that this isn't really an issue. Still, something about the quavering piano and Clark's haunting, muffled falsetto in the bridge gave the original that special something we can't define, yet we know it when we hear it. The original version of "Heartstrings" is also a good example of that indefinable quality, yet this reworked string quartet version fits well with the gothic imagery of death and decay.

Perhaps it's unfair to compare remakes to originals, but with a band like Demon Hunter, who often sets the bar so high, this reviewer can't help but be picky. If, like me, their music was a huge part of your angst-filled teenage years, you understand it's ultimately a compliment. Also, we have to hand it to a metal band who's so unafraid to express their gentler side, that they devoted a whole album to it.

Arguably Solid State Records' most commercially successful band, Demon Hunter has released a remarkable ten studio albums in under twenty years. Throughout their career, as they pump out blistering metalcore that even the occasional non-metalhead can enjoy, they've also shown off their softer side quite a bit, penning a small handful of rock ballads for each album. So an album full of acoustic renditions of those songs isn't too surprising of a venture. Songs of Death and Resurrection features reworked versions of some of their most popular rock songs and ballads, spanning their whole discography (with only Outlive and War not being represented). The originals of some of this tracklist are some of my favorite Demon Hunter songs; "Heartstrings," aka "My Heartstrings Come Undone," is a certified classic, as are "My Throat Is An Open Grave" and "The Tide Began To Rise." Naturally, these songs end up being my personal favorites here, opening and closing the album on strong notes. But my main issue is found in the journey between the two ends: it's long and pretty stale. It's the same issue I had with 2019's Peace, which is just that I don't listen to Demon Hunter for the ballads. What's more is that these nearly-bare-bones versions only serve to shine more light on Clark's lyricism, which I've never really connected with due to his sometimes overly-cryptic songwriting style. With the few exceptions named above, their best work isn't found in their rock songs, but in their loud, abrasive, pummeling metal. So while an hour's worth of acoustic Demon Hunter isn't a completely out-of-left-field body of work, it's turned out to be one I'm not interested in. Hardcore fans of the band are likely to love nearly every minute of this album, but personally, I think I'll probably stick to their heavier material. - Review date: 2/28/21, Scott Fryberger of Jesusfreakhideout.com