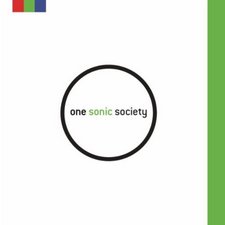 One Sonic Society
One EP

When something becomes a proverbial hit, a sequel naturally follows. Sadly sometimes even when something becomes a ridiculous flop a sequel still naturally follows. It's being in between that gets people in trouble. If it's ultimately good - the public defends it. If it's recognized as a failure - a cult following develops and doesn't understand why any "sane" person would think that their subpar object of affection could be anything less than holy. All this to say; One Sonic Society has returned and unfortunately Sonic (Green) picks up where their previous album left off.

The album begins with "Almighty God," and just like their debut; it's another track that seems to lack energy. This isn't to say that the song doesn't offer anything to the listener, but it simply feels like it could have been put in a better place, just not the first track on an album. This is followed by "In Jesus Name." This track must be lost maybe it took a wrong turn and ended up back in 1982. Simply put, the song feels so "kum bay ya," it doesn't fit here or there or anywhere. Although it is wonderful to declare the glory of Jesus, and actually the words are excellent, the melody is just not appealing.

As mentioned in the previous OSS review, some of the members were former bandmates from the amazing group Delirious. Thus, their musicianship and heart for worship is deep. However, with the second EP in a three-part series (titled One, Sonic, and Society), they decided to cover one of Delirious' biggest hits, "Majesty." First of all, the song was good, is good, and now just needs to be left alone. Secondly, it's almost awkward to hear because we all know that Martin Smith should be singing this song.

Thankfully there is a very refreshing moment in the album in "Now and Forever." This song fits lead singer Jason Ingram's voice perfectly. Everything seems to mesh well and flows beautifully as Ingram sings, "Who cannot compare to you my God? There's no other love like yours" This is hands down the best track on the EP. "Walk With Me" concludes the album on a relatively high note singing of how we need the Lord. Regardless, the song goes on for way too long and the music seems monotonous during the first 3 minutes.

So what do we find in the latest One Sonic Society EP? The same thing we found in the first. It's an EP that has one or two highlights but mostly lacks energy and creativity. However, as proved by movies like The Toxic Avenger, Robocop, and Swamp Thing another sequel is likely to follow. Maybe the next one will be better? But for this one - not so much.