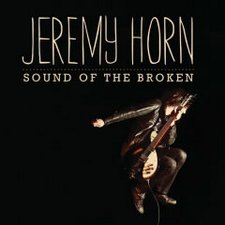 Jeremy Horn
Sound Of The Broken

Jeremy Horn (Christian singer/songwriter, not the famed MMA fighter) has had an interesting career thus far. He released his debut album, Atmosphere, in 2007. After that, circumstances, or should I say God, led him to help in leading worship at a friend's church during a major revival. It wasn't long at all afterward that Jeremy found himself as the full-time worship pastor. 2011 saw Horn poised to release his second studio album, but it never came to fruition as the album's release was delayed indefinitely. Ten months down the road, now 2012, Sound of the Broken, is finally releasing.

The opening, and title, track along with the second track, "Now is the Time" (also found on his live album, We Welcome You In) prove from the start that Horn knows how to craft a catchy pop/rock song. From there, the album never backs down. The songs may slow down occasionally, but Jeremy's knack for creating a catchy tune is undeniable throughout. "Only God Who Saves" was released as single in 2011 and is among the album's best as Horn proclaims the simple truth that, "You are a God with healing in Your hands; You are a God who heals today. You are a God who saves me from my sin; You are the only God who saves." Another lyric that really jumps out is at the beginning of the second verse as Horn sings, "I am humbled by the notion that my heart is now Your home."

The album's first official single, "Surrender" is another astonishing song. The song is about the beauty of giving your life to Christ and surrendering everything to Him. The chorus declares, "There is something beautiful about surrender. There is something beautiful about release. To free your heart, lift your hands finally let the madness end. There is something about surrender." The bridge goes on to plea, "Don't fight the urge to lay it down this is the better way." On top of these songs, "Sons and Daughters," "Where You Are" and "Faithful" are also noteworthy, but there are not any tracks you will want to skip.

While there isn't anything particularly creative or innovative with his sound, Jeremy's mastery of the genre, and of catchy songwriting in general, place him ahead of many others who fall short; he does this while maintaining a worshipful attitude in each song. His musical sound, and voice, may sound like a mixture of Grover Levy and Regie Hamm, if you are familiar with their work. This surprising album led to the disappointment of its long delay, but it is finally available for all to hear. You can truly feel God's anointing on Jeremy through this highly enjoyable listen. If you like pop/rock, or even contemporary, tune into Sound of the Broken.