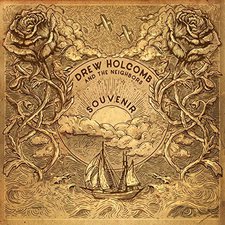 
Drew Holcomb And The Neighbors have always been a bit a throwback rock and roll band. From Holcomb's gentlemanly approach to songwriting and fashion (those debonair hats and natty suits fit the bill), to his duets with fellow "Neighbor" and wife Ellie Holcomb, there is a bit of a Johnny Cash classicism in the music the group makes. Hailing from Memphis, and firmly rooted in the Southern songwriting tradition, Holcomb mines the form for deeply personal observations about family life and travels about the world, and on his new album, offers aptly titled metaphorical "souvenirs" of thoughts about life in America at the end of the decade.

"The Morning Song" kicks things off with a mellow and thankful view of marital and family life. The song is a refreshing look at how good it can be to just be home, with people you love and nothing in particular to do. Songs of domestic bliss are a staple in the southern music tradition, but "The Morning Song" drips with a sincerity that lifts up the song beyond the trappings of songs of this type. "California" busts out next, with a wailing harmonica and a swiftly-moving melody about falling in love with a new place. With a California, folk-rock sound (made famous by such rock and roll luminaries as Tom Petty And The Heart Breakers, Jackson Browne and Neil Young), "California" plays like a summer road trip up that state's famous Highway 1.

"Fight For Love" presents more guitar crunch, and is the album's rowdiest number, with Holcomb shredding his vocal chords, and again, wailing on that harmonica. The poignant "Rowdy Heart, Broken Wing" slows things down to serve as an elegy of sorts for a friend who is "another refugee looking for peace." "New Year" takes a catalog-like look at a year's events, starting in January and moving throughout the major milestones of the year. Eventually, the narrative finds Holcomb walking through his neighborhood in the wintertime and musing that "I have nothing left to say, life and death, they never rest, and I've still got bills to pay." Yet, he still prays that his (literal) neighbors will experience "earth as it is in heaven," though that doesn't always "make sense" to him. "New Year" is a subtle song, played in a slow groove, but articulates the mystery of life observed, and does not shy away from the melancholy that many feel at the close of one year and the beginning of the next.

In the bouncy and joyful "Mama's Sunshine, Daddy's Rain," Holcomb pokes fun at his somber nature, and through the lens of his child (who is both melancholy like her father, and sunny like her mother), rejoices that her nature and personality are a reflection of both parents. A song like this that celebrates children without being cloying or overly-saccharine and sweet, is a joy to hear. Mr. and Mrs. Holcomb share a true duet on the Beatles-esq "Black And Blue," and with the following "Postcard Memories" and "Yellow Rose Of Santa Fe," the song forms a bit of a "cowboy song trilogy" that ends the album with a decidedly western feel. It's the fantastic and soulful "Wild World" that serves as an epilogue for the album, and features some of Holcomb's best lyrics to date. Written at the end of the contentious presidential election of last year, "Wild World" offers some down home advice about what truly matters in life:

"Some folks ain't got a dollar to their name, others got their own jet planes.
We all got the same blood running through our veins.
Whether or not you pray, black or white, straight or gay,
You still deserve the love of your neighbor.

By forging their own path (Holcomb and his band distribute all of their music on their own record company, Magnolia Music) and writing piercingly honest music, Drew Holcomb And The Neighbors have grown both their artistry and fan base in equal measure. Souvenir could have used a few more up-tempo numbers (they are trending more mellow on their last few releases), but as an honest, humble and tuneful look at life, the album gathers its "souvenirs" of songs well. The dusty tunes of Souvenir are a welcome addition to the American songwriting tradition, and a fine new chapter for Holcomb and company.

The word "vibe" is overused, but with respect to certain bands, it fits. And that compels me to write what might be the most pedestrian sentence I've ever included in a review: Drew Holcomb and the Neighbors have the coolest vibe. Souvenir has relaxed road-trip songs alongside bleak laments a la Johnny Cash, but it maintains a signature atmosphere in both lyrics and music that is as good as it gets in Americana. Though the production team from Medicine is back, the musical palette is broader, to outstanding effect. Listen to the first five tracks, all in a row, and marvel at both the range and how well that range works. One more thing: bonus points for the gorgeous linocut-style album cover, all full of symbols from the songs and commentary on the passage of time and life. - 3/26/17, Mark D. Geil