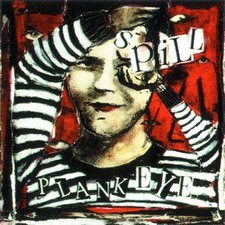 
Spill is the debut album of the legendary Tooth and Nail band, Plankeye, and one of the earliest releases of the label. This album is certainly worth giving a listen as it makes quite clear why Plankeye became such a beloved Christian band in the 90's, even if this album never captured as much attention as their next few did.

Musically, the band presents a unique combo of punk and rockabilly. Also included on several tracks are some funky bass lines that remind me of Phil Joel's original band, Drinkwater. The band's style is unique, although it does get overused as many of the songs start sounding similar to each other by the second half of the album. Of course, this is common in many punk albums. Thankfully, Plankeye decided to change up this specific style by the next album, which helps make it not feel too overused outside of Spill.

Lyrically, the band utilizes blatant Christian themes, but they are presented in a tone that is more serious than that of many Christian rock bands of the early 90's. A couple songs with standout lyrics are the vertically vulnerable "Scared" ("I know You're there Lord, I know You care, I know You set me free, but I'm still scared") and the concluding "Forever" ("The fallen leaders of the Church, They don't represent the truth in me"). The lyrics of the album, in general, have a more conversational tone, with the songs being directed either toward God or toward a friend.

Spill proves to be an impressive start for a blooming band. The music is certainly inventive, and the lyrics have a maturity less common in the evangelism-oriented Christian rock community of the time. While Spill is an enjoyable listen, I am glad that Plankeye moved in different directions on their following albums.