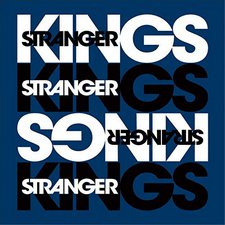 
One could make the point that the most gripping pieces of music have always had a sort of timeless quality about them. To be sure, the unbridled youthful exuberance that propelled the Beatles' earliest singles; the raw, bluesy power of Led Zeppelin's best efforts; and the dark, yearning melancholy that came to define Roy Orbison's catalog each sound as fresh and potent here in the present day as they did when they were first committed to tape all those decades ago.

The decidedly contemporary production values and lyrical slant of the Blue album from Stranger Kings do place it very much in the here and now, meaning that it doesn't quite have that same ageless aesthetic as the average offering from the artists above. That being said, one could consider it a sort of second cousin to those recordings, seeing as how it offers an assortment of familiar reference points for fans who came of age during any number of different musical eras.

The taut, terse drum sounds and engaging '90s alt-rock sensibility of "I Am an Earthquake" and "Year Book All Stars" should brighten the eyes of those with fond memories of Mellon Collie and the Infinite Sadness-era Smashing Pumpkins. The cover of Charlie Sexton's Top 20 hit, "Beat's So Lonely," appropriates the underlying intensity of the driving 1985 original and embellishes it with an ethereal, reverb-laden character that renders the current rendition equal, if not, superior to the first. And the impeccable fretwork peppered throughout the record will come as a definite boon to those who spent the better part of the '70s listening to every nuance of the work of their guitar-wielding heroes through a trusty pair of Koss K/6LC headphones.

In all fairness, the release isn't perfect. A preponderance of nondescript slower material toward its back end causes the momentum generated by the first half-dozen cuts to wane a bit prior to the last note being sounded. The wording of songs like "Steppe" ("Going down like a rosary/ Call me wonderful/ Colorado") will strike those who hear them as either unqualified brilliance or exasperating inscrutability depending on how enamored they are with lyrical deciphering. And the wall-of-sound sonic textures that blanket the project from start to finish, while certainly an asset in the overall sense, nevertheless cause a handful of the tracks to sound a bit less distinctive than they otherwise might have.

That said, even with those deficits factored into the equation, the sum total of the album's rhythmic forcefulness, rich melodic content and meticulous attention to detail - not to mention Holly Nelson's piercing, siren-like vocals - veritably lays waste to any such arguably finicky objections. Here at a time when far too many listeners are convinced that the only worthwhile inspirational music comes via radio-based artists who used to be worship leaders or metal-loving types who ply their trade flanked by flash pots and walls of amplifiers cranked to eleven, Blue's irresistible melding of streamlined, straight-ahead rock & roll and tuneful, consummately-constructed pop will almost certainly come as a surprise of the sweetest, and most welcome, kind.