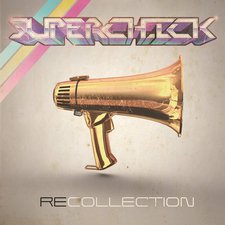 Fans of Superchick have followed the Chicago-based rock outfit through a virtual roller coaster of emotional highs and lows for over a decade now. Alas, as with every good thing, Superchick has reached the end of the road--or this road, anyway. Numerous twists and turns have occurred in the last year or so that have left the band at a crossroads. With the untimely death of drummer Chase Lovelace earlier this year, the band was left with the unfortunate conclusion that it was time to call it quits. As a result, what might have been a full studio album became five new tracks added onto the more nostalgic greatest hits collection, Recollection.

The album opens with the five new studio tracks. Unfortunately, the new songs are a mixed bag. The first song at least opens with some energy, but overall, is a bit too poppy even for Superchick. The sound is funky, which is nice, but largely showcases the efforts of Max Hsu, Superchick's resident DJ/Programmer. It is the first of a few songs with really subdued performances from one of the industry's finest performers, guitarist Dave Ghazarian. The robust guitar lines that are normally characteristic of Superchick are much more under the surface in these new recordings. In fact, none of the new songs feature much guitar at all. The next track, "Hope," is more successful at fitting into the Superchick canon. The track sounds like something from their 2006 album Beauty From Pain, specifically "We Live" or "Pure," which are both included on this collection. The message is uplifting and is an encouraging addition in light of the band's recent history. The third new track is an upbeat tune called "Sunshine." While the song is another uplifting offering, the main hook ("Every day is Christmas when every day is Thanksgiving.") is a bit of a hokey metaphor. The song is full of lyrics like this that are slightly too corny and ultimately just sound beneath Superchick's lyrical ability. Like the songs before it, there is a distinct lack of rock and roll on this track.

The first really solid new tune is "5 Minutes at a Time," which really works as a summative look at the band as they go their separate ways after all this time. The song provides a fresh perspective on the idea of living life in the present and enduring hardships in stride. The band has obviously experienced this firsthand on several occasions in their career, so the song really succeeds as a heartfelt anthem layered over soft piano and smooth electronic effects. The last new tune, "This is the Time," is along the same lines, but maybe a bit too similar. The encouragement to "step out, your life is waiting" is a good sentiment, but this kind of seems like a theme recycled not only from mainstream pop, but frequently from Superchick's previous work. It's not a bad tune, it just seems like we've heard this song before.

The "greatest hits" portion of the record begins with selections from Superchick's most recent album, Reinvention, which are remixes of popular songs from their 2008 album Rock What You Got. The choice to include so many remixes on this collection is a bit odd, even though the name of the album follows the pattern of their previous remix albums, Regeneration and Reinvention. Though I found myself missing the powerful guitar solo and gang vocals breakdown from the original, the "Rock What You Got (Fight Underdog Fight! Mix)" is a large improvement everywhere else. The guitars are even heavier in this version and the song just rocks more. The transformation in the remix of the empowering song "Cross the Line" is less profound. This is a good inclusion, but the choice to include a remix is puzzling since it isn't much different from the original. "Hey Hey" follows, the original version this time, and provides some backbone to the collection. Though Superchick usually does good work on remixes, it's nice to hear the perhaps more familiar version of some of these songs.

Next up is maybe Superchick's most iconic song, "Stand in the Rain." This represents another questionable choice as the band chose to include a new symphonic mix of the popular song. While this is a different spin on an old favorite, it seems out of place. The raw power of the original seems watered-down by the dominance of strings, though they are well-arranged. The treatment with strings and less heavy guitar influence really seems to drain some energy and heart from the original song and leaves the symphonic mix a softer, less inspiring version of Superchick's biggest hit.

The next three are also from Beauty From Pain and are all logical choices for the collection. The title track from that album is arguably the most mature song the band has written. It delicately handles the ebb and flow of pain in life and God's hand in all of it. The song is followed by original versions of Superchick favorites "Pure" and "We Live," both songs which showcase Max Hsu's programming dexterity quite well. Both songs are solid hits and including the originals here was a good choice. Next is my personal favorite Superchick remix, the "Red Pill Mix" of "Hero," which was originally on their second album, Last One Picked. I remember loving the original version of the song, which speaks to the perils of teasing and bullying, when I was in middle school, but I wasn't truly stirred by the emotion of the song until I heard the remix years later. It's amazing how changing the sound slightly to a more minor key and adding a rap bridge can really bring the song to life. The resounding cry of "Our time is now!" over the last refrains of the chorus really takes the song to another level. In this case, I have no argument with the decision to include a remix.

The last three selections come from the band's 2000 debut album, Karaoke Superstars, a personal favorite of mine since childhood. The first of the three is a remix of "Get Up," however that was included on the 2003 remix album Regeneration. While not a bad remix, it loses a bit of the original's spunky chick-rock power in favor of more mellow pop rock straits. Since the last two tracks are originals from their first album, it could have been a nice touch to include all originals of these songs as a celebration of the band's roots. Next to last is the energetic anthem to purity, "Barlow Girls." This song is another favorite and has been a building block for the band's success. This collection couldn't exist without a nod to this song. Recollection is capped off with original version of "One Girl Revolution," another formative "girl-power" anthem that female fans of the band have undoubtedly come to love. I really like this song and its tribute to spy themes, but I have to admit that this is another case where I prefer a remix. "The Battle Mix" of this song that was included both on Regeneration and Beauty From Pain 1.1 still stands in my mind as perhaps Superchick's heaviest rock and roll tune, and would have been an ideal choice for a closing offering on this collection.

Though there are some great selections, Recollection seems to miss several of the band's popular songs. With the addition of the five new songs, the collection portion of the album only totals 11 songs, leaving several gaps where songs like "Bowling Ball," "Suddenly," "Crawl (Carry Me Through)," "Stand Up (So Bright)" and "Anthem" could have been. Fans may be left with the feeling that this album could have been more.

When all is said and done, however, this isn't a bad place for the band to wrap up a fruitful career. A more complete collection could have been compiled, but the band chose each song by consensus to represent exactly where they are right now. Perhaps that's just how this is meant to be taken. Though the chances of an eventual reunion may be remote in this case, the band seemed to agree that this collection most closely represented where they are, and have been, as a band. And where will they go in the future? Only time will tell. For now, Recollection stands as perhaps an unfinished tribute to a well-loved band who captured our hearts for more than a decade. They will be sorely missed.

Rock What You Got turned out to be Superchick's last original album. Although some spotty releases surfaced with the band's old music on it over the past few years, the band didn't have a proper sendoff until Recollection. This Second Opinion will focus on the five new songs on the record instead of covering the "best of" portion of the release.

"Mr. DJ" is a funky, danceable tune, but it sounds too gimmicky in places to be a lasting highlight in Superchick's catalog. Instead of being heavyhanded, "5 Minutes At A Time" is a more upbeat ballad, and lead singer Tricia Brock's vocals shine. Both "Hope and "This Is the Time" are above average, light, bouncy pop songs, and "Sunshine" is a synth-heavy track that scratches the itch for another high-energy song.

Arguably, one of the biggest downsides to Superchick's music is the lack of a lyrical depth. They have offered terrific messages about perseverance and self esteem over the years, but their spiritual stance from album to album has always been a bit ambiguous. Nothing underlines this issue better than "Hope," where Trica sings "I believe in hope/Believe if I let go I'll float/And I will see that the water carries me/Living water carry me" in the chorus.

Since I've always been just a casual Superchick fan, I didn't expect to think anything of Superchick's farewell/best of album. However, after listening to the five unreleased cuts on the record, I realized I'm going to miss the band's raw talent for crafting catchy tunes and hooks. For longtime fans, Recollection is a must-own piece of their discography because of the new material, but it's not bad sampling either for latecomers to a band that will be missed. - Review date: 3/22/14, Nathaniel Schexnayder