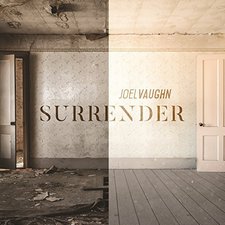 
The most profound statement of Joel Vaughn's Surrender EP is perhaps the one made by the cover art. It depicts a room divided in half. One half is trashed and dilapidated. The other half is pristine -- freshly painted and shining. It's a symbol of restoration more than surrender, but it's a nice concept nonetheless.

Two words to describe this album are 'bouncy' and 'upbeat.' The whole album carries a bit of an electronica vibe (think Owl City). The album opens with "As You Are," featuring a finger-snap percussion that is a point of interest. "One In A Million" is your typical 'you're beautiful just the way you are' song, today's answer to Steven Curtis Chapman's "Fingerprints Of God" or Jonny Diaz's "More Beautiful You." The lyrics are pretty Christianese ("You could fly higher than the heavens / Even the stars are never too far"), but if that doesn't bother you anywhere else, it won't bother you here.

"If I Trust" is perhaps the most original sounding track on the album. Although the lyrical approach is still fairly common, the lyrical content does acknowledge that Christians are not promised a perfect life and sometimes struggle with trusting God. The piano sound throughout is a nice touch (though this is perhaps negated by Vaughn's vocal gymnastics in the chorus, which get trying by the end of the song). "Every Alley Of My Heart" is the natural follow-up song--a declaration of surrender. The dance vibe, while fun, feels a bit out of place given the seriousness and sincerity of the lyrics. The EP closes with "All Things New," another electronic-dance song which fits the cover art of the EP. This song was clearly inspired by 2 Corinthians 5:17.

Overall, Surrender is very radio-friendly, clearly aimed at young teens. If that's your thing, you need to pick up this EP. But if that's not your thing, you will want to pass on this release. It's fun to dance around to a bit, and the lyrics throughout are positive and upbeat. However, it doesn't particularly stand out and there's really nothing on here that hasn't been done before in Christian music.