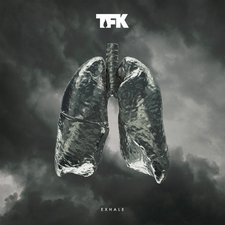 After a mediocre release with Oxygen:Inhale, Thousand Foot Krutch is back with the "sequel," Exhale, this time with more rock (11 out of 12 tracks to be exact). TFK have always been masters of crafting catchy rock hooks and lyrics you can't help but sing along to. The band delivers both in abundance here, but overall, this album lacks the lyrical poignancy and emotional impact to make this a memorable record.

TFK already put their best foot forward with their singles "Born Again," "Running With Giants" and "Give Up The Ghost." Tucked away towards the end of the album, "Born Again" is the strongest of these three with crunchy guitar riffs, a bouncy drum beat, singable lyrics and a great message proclaiming the power of God's saving grace. "Give Up The Ghost" features a ridiculously catchy chorus about his past sins being "out-haunted" by the Holy Spirit. The anthem, "Running With Giants," is the most arena-ready track on the album as Trevor boldly declares a sense gratitude for God's constant and transforming presence in his life. Trevor's vocal prowess is on full display throughout these songs as he flawlessly transitions between singing, shouting, talking, and quasi-rapping, proving he's come a long way since the band's first release 19 years ago.

Contrasting these highlights are a few weaker tracks, like "Push" and "Can't Stop This." "Push," which really needs a better name, has the same structure as their previous hit single, "War Of Change," but the execution and lyrics are not nearly as good. Even "Untraveled Road" from Oxygen:Inhale, which follows a similar formula, is pulled off with greater skill. The fist-pumping anthems "Can't Stop This" and "A Different Kind of Dynamite" are relatively fun, but have little substance. To be fair, the amount of things set on fire is limited to one line in "Incomplete," but there are still dozens of bombs and explosion metaphors. Apparently, Trevor inhales fire and exhales explosions.

"The River" is a mid-tempo rocker with a southern edge. It's hard not to disassociate "The River" from the plethora of other river themed songs when the lyrics used here don't bring anything new to the table: "take me down to the river / wash me in the water / take me to the bottom." It's especially difficult because Decyfer Down did a similar song better in 2013. "Honest" is the only ballad on the album, so there is inherently a lot of emphasis on it, and even more so for being the closer. While it is a solid track, it doesn't hold up well under the weight as it is not up to par with "This Is A Call" or "So Far Gone."

Exhale is far from a letdown, but it could certainly afford to take more risks. Part of the problem lies in having 11 rock songs in a row. There are a few unique moments on the album that help break it up from sounding the same (such as the fast and furious rapping on "Adrenaline" and the screechy guitar on "Off The Rails"), but when compared to the musical mastery of songs like "Welcome to the Masquerade," or the fun rhymes on "Phenomenon," these new tunes just don't stand out as much. Though Exhale is not the band's best release, it is step up from Oxygen:Inhale and TFK fans would be remiss to pass up on this rock fest.

Rock veterans Thousand Foot Krutch have been producing consistently solid content for over a decade now, but it's been hard to deny their recent independent releases have struggled to live up to the standard set by their Tooth and Nail years. Unfortunately, Exhale doesn't seem to end that struggle. Album opener "Running with Giants" features thundering guitar work and a pumping bridge that brings elements of Welcome to the Masquerade to mind, however, the chorus feels stale and repetitive, working as the low point of the song rather than the highlight. "Off the Rails" and "The River" suffer in similar ways, despite the latter further exploring the southern rock sound established on the last record. When it comes to ballads, "Honest" is arguably one of their best and on a record as rock-heavy as this, I wish there were more. In the end, Exhale is far from a bad record. A handful of excellent numbers (i.e. "Honest," "Adrenaline" and "Give Up the Ghost") push the album into the spotlight and steer it clear from redundancy. It may not be the return to form fans were hoping for, but it does remind us of why we fell in love with the band in the first place. - Review date: 6/14/16, Lucas Munachen

Christian and mainstream rock juggernauts Thousand Foot Krutch have been rocking hard consistently for over 15 years, and Exhale is definitely no exception. While their previous work, Inhale, was more poppy and experimental, Exhale is its sonic opposite, returning to what TFK is best at: anthemic, adrenaline-filled rock. While it doesn't really reinvent the wheel, fans of the band and rock in general will still find much to enjoy. Whether showcasing anthemic rock assaults of "Incomplete" and "The River," or the adrenaline filled rap-rock of "Adrenaline" and "Push," there's plenty of "rawk" to pump your fist to. Lyrically, it's one of their best as well, especially on "Running With Giants" and "Give Up The Ghost." My only issue with the album is the lack of variety. Eleven songs are upbeat rockers, leaving only one ballad in "Honest," which is thoroughly enjoyable. Now I know with TFK you kind of know what to expect from their music, but as good as most TFK ballads usually are, I'm a bit disappointed that there aren't one or two more ballads. But otherwise, it's a solid rock album. It may not be their best offering, but it's a worthy addition to the band's library. - 5/27/16, Dylan O'Connor of Jesusfreakhideout.com

Thousand Foot Krutch has returned with Exhale, in which the band seems to return to their rock roots. Many of the rock anthems present on the album, such as "Lifeline" and "Born Again," are catchy and upbeat. Many of the same elements that have been found on their previous albums show up again, as "Push" almost feels like it belongs on Phenomenon or even Set It Off. Two songs on the record are set apart from the rest of the hard rock tracks. "Adrenaline" features rapping reminiscent of TFK's early works, and the final song "Honest" is the only non-rock track. The latter features soft strings and gentle guitars, which sounds very similar to "Wish You Well." It's the deepest, most personal song on the record, and the lyrics are nothing short of sincere as Trevor McNevan both cries out to God and questions himself. Though Exhale is full of components one has heard on previous albums, this record has many highlights, and fans of Thousand Foot Krutch will not want to miss this installment. - 6/7/16, Sarah Berdon

TFK's disjointed Oxygen: Inhale was unfortunately one of their weakest (if not the absolute weakest) albums to date. Thankfully, after the long held breath between albums, Exhale spells redemption. Exhale is more cohesive, features a better overall flow, and is probably their best work since Welcome to the Masquerade. The Canadian rockers hold steadily to the rock sound throughout, avoid the rapping the plagued Inhale (though the vocals are still signature Trevor), and the lone ballad, "Honest," actually delivers. Krutch fans should find a lot to love this time around. "A Different Knd of Dynamite," "The River," "Off the Rails" and "Adrenaline" are all highly recommended. It's time to be excited by TFK yet again! - 6/15/16, Michael Weaver

Perhaps we weren't really sure what we were asking for when we said Oxygen: Inhale was too soft. Now that TFK is finally Exhale-ing after almost two years, the admitted rock goodness it breathes out is a bit too one-dimensional, a bit too familiar, and possibly overdone. But it is a fun record, and if you like to rock out for 45 minutes straight, you'll love it. - 6/17/16, Mark Rice

Canadian rockers Thousand Foot Krutch are one of those extremely consistent bands; a quality often overlooked and unappreciated. With each release, you get solid rock tunes, some rapping tossed in, a power ballad or two and you're set. And that's exactly what Exhale is, with tracks like "Running With Giants" and "Off The Rails" to satisfy your rawkfist, while "Adrenaline" and "Honesty" make this a complete TFK record. No, it's not as good as Phenomenon, but not many albums are. Exhale is definitely worth checking out and blasting all summer long! - 5/20/16, Kevin Hoskins