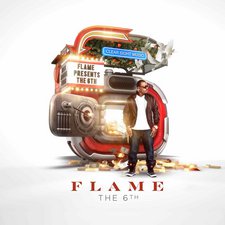 Any time former Cross Movement Records artist FLAME releases an album, rap and hip-hop fans are going to pay attention. The biggest question is: will FLAME's sixth album, aptly titled The 6th, put him back on track after the somewhat disappointing Captured? Let's just say: FLAME is back. The album title is a double entendre of sorts. The obvious meaning is the fact that this is FLAME's sixth studio album as a solo artist; the second is a reference to the creation of man on the sixth day. The album was inspired by the book Tempted and Tried: Temptation and the Triumph of Christ by Russell D. Moore and features a running theme of man and temptation--both the temptation of Christ and the temptations we face as sinners saved by grace.

"Try Me," one of two tracks featuring Young Noah, is an excellent start. The song has a good beat and a nice flow that will have you bobbing your head in a hurry. The next song, "The 6th Day," really begins the theme, with the creation of man. Immediately following the creation of man is the fall of man with "The Great Deception." FLAME takes the point of view of the serpent in the Garden of Eden for most of the track as he tempts Eve to disobey her creator.

"Show Out" features Lecrae and is another noteworthy track along with the single, "Trap Money," although the constant repetition of "I don't think they hear me" throughout the song is a little much. The album's highest point may be the final verse of "Caught in the Lights;" FLAME breaks down the temptation of Christ after fasting in the desert. He fully explains why the devil's seemingly absurd offer was a true temptation and how it would have altered the fate of humanity for eternity.

"He Did it Again" is a club song that declares, "He rescued me from sin. He saved me now I'm born again. He made me apart of his plan. Blinded my misery then he delivered me, he has forgiven me, I've got the victory." Another interesting track is "Scripture Alone." In his raps, FLAME breaks down the Bible in great detail, talking about different manuscripts that comprise what we know as The Holy Bible and explains how they work together to prove the Bible's validity.

The album really slows down for the final few tracks, but still features some solid tunes. "Christ Alone" contains some reversed lyrics (literally played backwards) in the female vocals in the opening. It almost sounds like pretty gibberish, but if you single it out and reverse the sound you can hear some of the lines from V. Rose's song "Let's Go Home": "It's too hard to explain," "You don't need a halo," "Where we are, we are," "It's like Peter in Neverland" and "Not the same." During this time, FLAME repeats the line, "One Day we'll be like You" and other variations of the same line played forward. The 6th features many collaborations with other artists, but the strangest is probably with DecembeRadio on the track "Let Go." As it turns out, they actually make a pretty good fit on the track that talks about giving your burdens over to Jesus.

In an album that has a running theme of temptation, FLAME has returned with a spiritually relevant message and a solid sound behind it. First-rate beats, tightly woven flows, and good choices for collaborations dominate most of the album. The biggest complaint is that the track listing could have broken up the faster and slower paced songs a little better. This may not be his absolute best work to date, but it is a definite upgrade from 2010's Captured. If you aren't familiar with FLAME, this album should be right up your alley if you are a fan of Lecrae or Trip Lee. The 6th is definitely a welcomed addition to the early releases of 2012.

Flame has become a bigger player in the hip hop field in the past few years and is releasing his sixth full length album this year, and second through Clear Sight Music, called The 6th. Flame's last album, Captured, was a bit of a disappointment musically, as it leaned heavily toward a more poppy style of rap that was pretty uncharacteristic of past Flame albums. While he's always incorporated some softer stylings and bits of R&B into his albums, it was a big change. Thankfully, The 6th goes back to the norm for the St. Louis rapper. There is some pop influence, as V.Rose makes a couple of appearances, and there is some slight autotune usage here and there (the club rap feel of "He Did It Again"), but The 6th also has its fair share of rap jams, like "Try Me" (which features an obnoxious hook from Young Noah) and "Trap Money." Once again, Flame does throw in a little bit of relevance with some dubstep in "Christ Alone," but it feels out of place for a rap album (although the track is a little schizophrenic, with all kinds of different sounds and beats used throughout); still, the song would've been stronger had it been left out. It's the only time any dubstep is used on the album, though. Flame's knowledge of the Scriptures and some of their deeper meanings are evident as always, which has helped me understand parts of the Bible better with previous albums, and that carries through on this one as well. Message-wise, I specifically enjoy the track "Scripture Alone," which makes solid cases for the legitimacy of the Bible. Fans who were unimpressed with Captured and were hoping for more of Our World: Redeemed-style material will be pleased to hear The 6th. It's not his strongest outing to date, but it's up there for sure. - 2/23/12, Scott Fryberger of Jesusfreakhideout.com