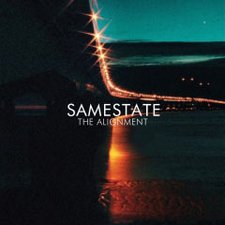 Good radio pop is hard to come by, but when a band performs even a little bit above standard expectations, it's a sound to behold. Enter Sparrow Records signees Samestate; with The Alignment already in full force, it juggles the line between complacent musicmaking and innovative aptitude, but fortunately for listeners, it opts more for the latter than the former.

The Alignment has a great deal of marketability going for it, and the very first track "Realign" demonstrates that fact immediately. With a slow crescendo at its start, the chorus is an event to await and magnify. Immediately following, the listener is introduced to the bouncy "Sons and Daughters" and the single-esque "Hurricane," accurately summing up the band's overall approach in three songs. Continuing through the record's ten tracks, the sonic guitars everywhere are a great selling point to the band, filling listeners' ears with musical atmosphere that resonates with joy; "Wake Me Up" and "Hearts on Fire" are perfect examples of this trend, giving the songs density with also leaving room to breathe freely. On the vocal side, Dalton Diehl matches the character of his band's sound very well. With a voice somewhere in between Aaron Gillespie and Seabird's Aaron Morgan, Diehl's pipes are surely a memorable aspect of the band's approach, soaring at the high moments for effect with the band wisely building their songs around his abilities.

As a general rule, however, Samestate's sound feels unchallenged. With their obvious vocal talents and instrumentation, there's potential for some really interesting constructions in their artistry, but they don't show it nearly enough. The contemporary pop rock sound they carry is somewhat of a good start, but it begs to be turned up a notch on a creative note. With layers of guitars and keyboards, they create a soothing atmosphere almost in the same vein as art rock that does sidestep the usual flubs of radio pop, but they would do well to experiment a little bit more to showcase their talent better. Even lyrically, isolated lines such as "There is a God who is big enough to save us" ("Shadows") or "wherever you are/roll over your storms/look up to the stars/you are not alone" ("King") are disappointing, but more experience as songwriters is sure to improve this area. As of now, Samestate's best foot forward is a cut above the norm; they don't need to kick things up too much to get their sound in the right artistic direction, and the more songwriting they do, the better they will undoubtedly become.

The highlights of Samestate's sound become more and more noticeable upon each listen, and there's evident potential here for a glowing record on the horizon. When great talent and great songwriting align, it reaches beyond just what the radio expects to broadcast; casual radio pop fans will ravenously devour Samestate's inclinations in The Alignment, but with the band's debut in the books, their next venture as a signed band will hopefully be something unmistakably their own.