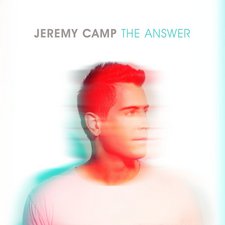 
Armed with one of the most striking voices in the Christian music industry and a fierce desire to proclaim the name of Jesus, Jeremy Camp is back with his 9th full-length studio album. 2015's I Will Follow showed growth from his previous releases, so the question is: which direction will Camp go in with The Answer?

Right off the bat, the major criticism of The Answer is obvious: it feels familiar. Album opener "Word of Life" immediately draws comparisons to "Living Word" from I Will Follow, bearing almost exactly the same message of holding on to the life-giving truths in God's Word. Granted, it's a nice message and the sound between the two is quite different with "Living Word" being a pop/rock tune and "Word of Life" being a full-fledged pop song. Another apparent similarity comes in the chorus and bridge of "Never Stopped Loving," which sounds like it came from Jesus Culture's "One Thing Remains" (listen to how "you never stopped loving / never stopped loving / never stopped loving me" sounds like to "your love never fails / never gives up / never runs out on me" lyrically and melodically). No other direct comparisons come to mind, but as a whole, it's hard to shake the feeling that The Answer has been heard before.

Within The Answer's conventional framework, Camp has created a rather enjoyable album. "Tell The World" offers an infectious melody about sharing Jesus with everybody, "My Father's Arms" is an encouraging song for anyone who is spiritually weary, and "Word of Life" has a fun sound with its electronic beat and a peppy synth. When Camp slows things down, the sheer power of his voice and passion in his heart are on full display. The best example of this is in the transition from the bridge to the final chorus on "Heaven's Shore (Forevermore)," which has a tangible sense of hope pouring out from Camp that might cause the hairs on your arm to stand up. The mid-tempo number "Storm" is also one of Camp's strongest vocal performances since Speaking Louder Than Before. One song rises above the rest though, and it's saved for last. "Awake, O Sleeper" is a boot-stomping rocker that will get you smiling and singing along in no time. The song works so well, not just because it is edgier or because it has a different sound from the rest of the album, but because the lyrics think outside the box, "Oh, Abraham would raise his hands and mourn this very day / for his children left the promised land in search of their own way and they'd dream away these evil days in hopes that God can't see do you hear the lion roar? / wake oh sleeper."

Despite the drawback of predictable musical structures and commonplace lyrics, The Answer is a welcomed addition to the Camp discography. This is especially true in 2017 since solid pop albums in CCM have been scarce (MercyMe and Landry Cantrell are exceptional ones that come to mind). In all likelihood, The Answer won't woo back fans who fell in love with his early rock sound, but as a pop album, it has a lot of good qualities. If you are fan of Jeremy Camp, you will want to pick this one up.

It's been seven years since CCM veteran Jeremy Camp released his second worship project, We Cry Out, and thus it's been seven years since he embraced the contemporary pop sound he's known for today. Unfortunately, each consecutive album has shown little to no change or development to this approach and his latest release, The Answer, is no exception. The record sounds massive and anthemic but when all is said and done, there's little that sets itself apart from what other artists established in this sound are doing. Lead single and opener, "Word of Life," has a catchy verse but its chorus lacks a memorable hook or any real musical punch. "My Defense" fares a little better with a solid refrain that shouts "I'm saved by the blood / I'm saved by the blood of Jesus!" "My Father's Arms" is another pretty anthem about the safety of being in the arms of Christ. Again, there's nothing particularly memorable here, but Camp sells these songs with his passionate and enthusiastic vocal delivery, so although they're certainly safe musically they're at least likeable. With all this said, The Answer does contain one oddball that's worth mentioning, that is the southern rock number "Awake O Sleeper." This is a head-scratching addition as there is nothing in the tracks before it that even hint at this sound. It's an excellent song and quite possibly Camp's best in years, but this is only even worse for the album as it ends it on such a tease. I wish Camp would utilize this sound more instead of the overly safe pop of the ten tracks before it. Despite this frustrating end, The Answer is still an enjoyable release and worth checking out if you've liked any of Camp's previous material. Fans of his earlier records, however, will still be waiting for that return to quality. - Lucas Munachen, 10/3/17

In The Answer, Jeremy Camp once again sings theologically sound and effectively simple affirmations of Jesus' love. Musically, it isn't revolutionary, though it's enjoyable and shows off Camp's vocal range and power. - 10/3/17, Andrea Hardee of Jesusfreakhideout.com

If an artist doesn't challenge the norm, he should champion. That's what Jeremy Camp does on The Answer, which commits to synth pop with results that far exceed the less balanced, more cheesy I Will Follow. There's nothing new here, but it's a lush, beautiful example of taking pop templates and filling them with heart, soul, and gorgeous, catchy vocals. Melodically, Camp doesn't take a single wrong turn until the final three tracks ("Carriers" has a lackluster chorus, "Love So Great" seems under-cooked, and "Awake O Sleeper" is a southern rocker that brings out the most grungy aspects of Camp's voice). Everything else is pop perfection, especially the opener "Word of Life," the massive "Storm," and the emotionally stirring "Never Stopped Loving" -- a song that, from a cynical perspective, might sound like a man-centered presentation of the Gospel but rather displays the personal revelation of God's love to you and me, in all its grand profundity. - 10/4/17, Chase Tremaine of Jesusfreakhideout.com