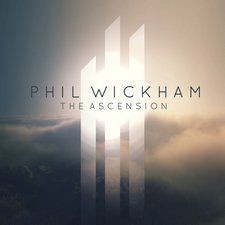 Phil Wickham might debatably have one of the most beautiful raw voices, not just in the Christian market but also within the music industry as a whole. Over the past seven years he has really made his mark on the worship music scene with his fresh creativity and exploratory vocals. Now with his latest offering, The Ascension, he's bringing listeners what they love with more fervor than ever before.

The album opens with the acoustic driven title track, "The Ascension." Its folk sound with group vocals give the song that at-home feeling that makes the track rich in quality. Also, Wickham's references to CS Lewis as he sings, "Further up, further in, just to be with you again, let us start the ascension," adds a philosophical sense to the song. "Holy Light" brings in some more digital sounds that are reminiscent from Wickham's 2009 release, Heaven and Earth. However, the recording has a more tightknit sound with succinct breaks and perfectly layered vocals. Songs such as "This is Amazing Grace," "Over All," and "Wonderful" carry this same synth-driven sound but with notable growth lyrically and melodically. Special note should be made for "Wonderful" as it could make for a great corporate worship song for congregations. It's doctrinally solid, very loud in admiration of the Lord, and musically progressive.

For those seeking more of that acoustic sound, "Carry My Soul" really fits the bill. The beautiful lyrics that express the joy of entering Heaven to be with Jesus are so perfectly put as Phil sings, "I will run and I won't quit I'll come running through the gates, look into your face, oh I can hardly wait, until you carry my soul, carry my soul away." Songs that continue in this acoustic stream are the original hymn-like "When My Heart is Torn Asunder" and "Mercy." The latter song features some amazing vocal arranging of climbing falsetto; it's magnificent.

Occasionally, with a Phil Wickham song, it can be near perfect, but something knocks it off that path, if only for a few seconds. In this case, it's "Tears of Joy." Lyrically, it is a pure celebration of Christ's glorious return. Musically, it is heavenly. It is such an excellent track and could be arguably one of his best songs, until the bridge where an out of place saxophone interrupts the track. Its awkward insertion overshadows Wickham's trademark beautiful falsetto. It wouldn't be so bad if it was behind his vocals, but it seems to take center stage. Thankfully, it is only present for just over half a minute.

The Ascension really is an excellent combination of all of Phil Wickham's previous offerings with dashes of enough newness to make it certifiably fresh. Fans of Wickham's work will most definitely be pleased and inspired to worship the Lord, and newcomers to his work may just become fans. Wickham's creative use of music, theology, and worship are clearly present and are executed with excellence. Bravo Phil Wickham, it only goes up from here - but I guess that's the whole point right?

Phil Wickham is almost in a category by himself. He is a worship artist, but almost every note he touches seems to turn fresh in his hand and in our minds. And it also helps that he has the most killer vibrato in Christian music since Kevin Max. As such, 2013 brings around the fifth major label release of Wickham's thus-far illustrious career, The Ascension.

One way in which this album could definitely be summed up is that those who are familiar with Heaven & Earth and Response will already be familiar with The Ascension. But while this statement is accurate, it paints far too broad a picture of this album's sound. The prominent electronic elements are there, but they're far less intrusive than either of his previous albums (maybe save for the hooks in "This Is Amazing Grace" and "Over All"), which can easily be attributed to Wickham's growing comfort with this musical style. And it is not to say that the album lacks in any innovation whatsoever. Indeed, Wickham is far too skilled a musician to let his music grow stale; between the gorgeous acoustic treatment of "Mercy," his finest album opener yet in the title track, and the overall more epic scope of the album, Wickham's touch is just as brilliant as ever. And he still has found room for excellent congregational options like "When My Heart Is Torn Asunder," "Holy Light," and even the decidedly more radio-friendly "This Is Amazng Grace." Only "Glory" falls flat here as a subpar selection.

Between the scope that has almost the feel of a concept album, and simply yet another solid musical performance (and that VIBRATO!), Phil Wickham has definitely unleashed another winner into the modern worship circle. It isn't the best worship album of the year, and it may not even be the best album of Wickham's career, but it is very hard to ask more from an artist than what Wickham does on a consistent basis. - Mark Rice, 9/23/13