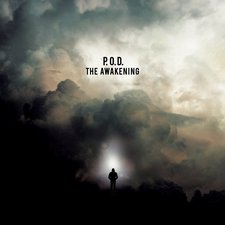 
P.O.D., having conquered the mainstream hard rock scene around the turn of the millennium like no other band of faith had done before or has done since, appeared for much of the decade following their classic release Satellite to be in decline, at least in terms of popularity and importance. Then, unexpectedly, they made a comeback of sorts with 2012's excellent Murdered Love. Following an acoustic re-make album last year, Payable on Death has released The Awakening, with the question being: was Murdered Love a blip on the screen or was it the beginning of a second golden age for the band?

The answer to that question is a heavy, dark, and ambitious "yes" to the latter. This album is certainly heavy, with driving, mosh-worthy guitar riffs to be found all over the place. Tracks like the thrilling opener "Am I Awake?," the apocalyptic "Rise of NWO," the fantastic rocker "Get Down," and the punk joints "Speed Demon" and "Revolucion" all prove that P.O.D. is not slowing down with their sound. If anything, this album is heavier than anything they've put out since The Fundamental Elements of Southtown. At the same time, this is as melodic as lead vocalist Sonny Sandoval has ever been, largely laying off the rapped verses. In past efforts, this was at times a weakness, but that is not the case here, as the melodies, as well as Sonny's voice, succeed much more than they fail. Musically, the band has simply put out a very good straight-up rock record, while keeping enough of their patented diversity (even touching on some jazz in the song "Want It All") to satisfy fans.

And then of course there is the (among P.O.D. fans, much discussed) fact that this is the band's first concept album. There are both pros and cons here. The negative is that every song has dramatic segues of sound effects and characters talking, some of which are not very audible so, at least on the first several spins, it can be difficult to fully understand what is going on in the plot line of the album. But the positives far outweigh the negatives. First, the segues enhance the music (and vice versa), give cohesiveness to the entire album, and thus result in a depth of experience and a depth of spirituality that would not be present otherwise. And second, for long-time fans especially, it is thrilling to hear a band stretch themselves to make one multi-faceted piece of art rather than simply a collection of songs.

The Awakening, while mostly dark in sound and content (for example, see "Criminal Conversations" - a beautiful but ache-filled song featuring Maria Brink from In This Moment), has a couple uplifting standout tracks in "This Goes Out to You" (the album's lead single) and the powerful closer, "The Awakening." With the ebb and flow of different moods and styles all being brought together into an album that is greater than the sum of its parts, this is a record that must be listened to from start to finish and that rewards those who listen closely with a fortifying spiritual experience.