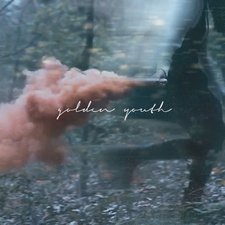 The most reputable artists are the ones that take the recording process very seriously. They take certain measures to get the desired results, and oftentimes, that means escaping from the usual environment for a little while. Golden Youth, one of last year's best new artists, chose to write and record their next project in a secluded cabin in the wilderness, and the result is an EP appropriately titled The Cabin. After last summer's humble triumph, Quiet Frame; Wild Light, listeners had every reason to hotly anticipate their follow-up, and The Cabin delivers.

In the band's short career, musicians Stephanie Lauren and Kyle Monroe have established themselves as creatives looking for distinctive ways to expand their concepts. This time around, the distinctives from last summer are still present; with a myriad of instruments and full creative control at their disposal, the window's wide open for experimentation. Leading up to the release of The Cabin, Golden Youth introduced the project as a means to use the outdoors to influence their next product, and it's apparent. There's nothing here as powerful or explosive as "We Are Alive" or "Brother in the Morning Light" here, but energy is still there. The intro track, "Tall Trees," sets the tone well for the rest of the EP with softness and reserved energy, though the track's inclusion feels a bit odd for such a short project. Still, it transitions to the percussion-laden "Plans" effortlessly. Immediately, Stephanie Lauren's voice feels less forceful overall, echoing back to the intimacy of nature surrounding the music.

"Where's Your Heart Gone" serves as the "single" of sorts for The Cabin, and it's the most like their previous work. The lead-in acoustic guitar seems to give an "unplugged" feel at the beginning, but the track eventually melds several instruments together to prove otherwise with a crescendo to end it with a bang. "Mountains" has a similar atmosphere as "Plans," but its vocal work makes the entire track a standout, as well as its lyrical optimism ("Tomorrow is life left to find/wake up with brand new eyes"). "Stars Apart" tops off the EP with acoustic-based melodies and creative percussion to usher out the listener. At the end, it's a soothing listen with plenty of detail that rightfully keeps its attention.

With only five tracks of material, The Cabin feels like a small sample, but since it is reportedly the first in a three-part series, there's plenty of promise shown here for future installations. As good of a debut Quiet Frame; Wild Light was, it seemed to be only the tip of the creative iceberg, and The Cabin is a masterful next chapter. Golden Youth are Slospeak Records' rising stars, and thankfully, there's plenty more to come.

I think it's safe to say that Slospeak Records is one of JFH's favorite independent record labels (and not just because Davy Baysinger is behind it all). Even though they're quiet, and don't release albums with the frequency of the major labels, or even some of the other independent labels like Humble Beast, when they do release an album, it's usually excellent. Such was the case for newcomers Golden Youth when they released Quiet Frame; Wild Light last year, and they've remained a quality entity. The Cabin is their follow-up EP, and it's quite delightful. Recorded in an actual cabin in the Smoky Mountains, Golden Youth was going for a more serene, somber, and perhaps even a more secluded feel than the EP's predecessor. The duo did manage to capture a bit of that in the recording sessions, but The Cabin still feels more like a continuation of Quiet Frame; Wild Light, as if the two EPs were meant to be one full album (not a bad thing at all, by the way). From the dreamy, instrumental opener "Tall Trees" to the Lumineers-meets-Eisley closer "Stars Apart," The Cabin is a worthy follow-up EP. If you enjoyed the debut, this will fit right in your music library, as will (most likely) the next two chapters of this new trilogy of EPs the band has started. - Review date: 7/27/14, Scott Fryberger

Bands like Golden Youth make what is, in many ways, the antithesis of "popular" pop music; organic and nontraditional instrumentation, raw production, lyrics requiring real effort to digest, and a depth and beauty that grows with repeated listens. The Cabin EP takes an even rawer, more stripped-back approach than their impressive Slospeak debut last year, splendidly capturing beauty and nature in the way Stephanie Lauren and Kyle Monroe had hoped it would (having recorded this EP in an eponymous cabin). With four excellent new songs after a short instrumental prologue, The Cabin EP is barely enough of a taste of Golden Youth's potential, as they still have not technically put out a true full-length album, but it is definitely enough to tide us over 'til then... - 8/2/14, Mark Rice of Jesusfreakhideout.com