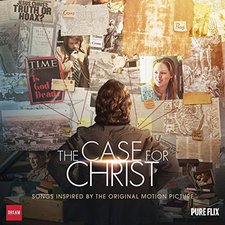 
In 1998, Lee Strobel published The Case for Christ, an account of his investigation into the claims of Christianity, ultimately resulting in his conversion. Now, nearly 20 years later, a movie adaptation of the book and his journey hits theaters with an 83% "Certified Fresh" rating on Rotten Tomatoes (and doing much better than the new Smurfs movie). In tandem with the film is a soundtrack of songs inspired by the movie. Is the album as fresh as the film?

Most of the various artists gathered here are worship bands for mega-churches and follow in the synth-laden worship fare. As such, the album is more of a worship collection and less of a movie soundtrack, which works well given the film inspiring it. Like the movie and book, the big theme here is belief. The word "believe" makes it into nearly every song and three of the song titles. Although doubt is also mentioned frequently, these songs come from a place of emerging from unbelief into repentance. While this is fine so far as it goes, I can't help feeling it was a missed opportunity to have at least a couple of songs relating to Strobel's struggles before coming to faith. This would have added color and been nicely counteracted by the other songs' focus on faith.

With most of the songs being of similar style and theme, they tend to blend together. However, a few standouts include the opening title track by JT Murrell, which acts as a good summary of the film, book, and album. Others include New Hope Oahu's "The Evidence," which offers a nice twist on the theme by pointing to the church as being a case for Christ, and Soulfire Revolution's "Your Love is Chasing Me," featuring an interesting musical arrangement. Heriam's "Your Moment Has Come" momentarily breaks the worship feel to act as a fitting invitation to faith. But The Church Vessel, by far, steals the show on this album with two offerings ("Draw Near" and "Your Love") that sincerely convey the faith and love of Christianity and capture the listener's interest to hear more from them. The soundtrack's weakness lies mostly with the lyrics. Some songs stray too far into cliché territory and one or two suffer from clunky lyricism. NewSpring Worship's "Our Great God," though a fine worship song on its own, doesn't quite carry the theme along, especially given its place at the midway point.

If you come into this album expecting a variety of songs dealing with doubt and belief, you may be surprised at what you find. Although those themes are here, they are dealt with in the vein of worship. There's nothing too philosophical or even theological, just faith expressed in a simple form. If you remain skeptical, do a little digging, give the songs some time, and the album may surprise you like the movie has surprised critics.