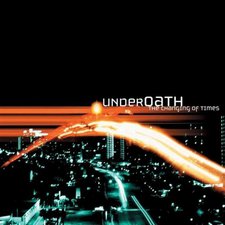 Underoath
The Changing of Times

To call up the legendary Bob Dylan, the times they were indeed a'changin' for the boys of Underøath following the release of their sleeper magnum opus Cries of the Past. 2002 saw the departure of lead guitarist Corey Steger and bassist Matt Clark (i.e., the two guys who rocked the spiked gauntlets and combat boots onstage during the COTP days) and the subsequent addition of current UØ guitarist Tim McTague and temporary bassist Ed Nottke. Needless to say, a shift in sound was to be expected, and The Changing of Times delivered on those expectations, steering away from the tough-guy black metal image into more emotional melodic hardcore territory. But was this changing of the Underøath guard beneficial or harmful to the band's sound? Moreover, how does this apparent "transition record" hold up against two of the band's most beloved records in Cries of the Past and They're Only Chasing Safety?

Don't get me wrong, I love me some old Øath, but I found a lot to like about Chasing Safety and the guitar work of McTague (and sometimes, yes, even the pipes of Aaron Gillespie) with their catchy hooks and sense of melodic ambience that really breathed life into the new incarnation of the band. Now, take those elements and combine them with the blackcore sensibilities of Octavio Fernandez and the angst-ridden lyrics and desperate screams of Dallas Taylor, and what you have, my friends, is a masterpiece. Regarding overall sound, this album is right in between its preceding and following albums, riding the line of beauty and chaos, melody and dissonance, love and pain; to genre-fy this record for scene points, I'd say that The Changing of Times marked the band's transition from straight-up blackcore into "black emocore." McTague and Fernandez make for an intriguing guitar pair, throwing down bludgeoning metal riffs interspersed with sensitive clean licks and haunting melodies; as soon as Corey Steger starts being missed, Octavio reappears to remind the listener where this band came from while McTague foreshadows their immediate future. Aaron Gillespie, for his part, does his duties on the kit, bringing a poppier sensibility overall while not being afraid to get rude and heavy when it counts, and his enigmatic, polarizing vocals feature prominently on the leadoff track as well as the title track; in minimal doses such as this, Gillespie's vocal contributions shine their brightest. Nottke brings the bass into its biggest role since Act of Depression, making it a significant contributor to the melodic side of the album while holding down the fort with force on the low end. Dallas is Dallas as usual, bringing his A-game to the mic with regards to his almost-effortless throat-shredding screaming. Unfortunately, the one thing missing from this record (except briefly on "A Message For Adrienne") that could have catapulted it to the status of Underøath's greatest is Dallas's great death growl; you know a vocalist is good at what they do when (as is the case with Dallas and others such as Job For A Cowboy's Jonny Davy and With Blood Comes Cleansing's former frontman Michael Sasser) their high screams and low growls seem to take on two separate identities to the point that it's hard to picture one guy being responsible for both, and this contrast is sorely missed on this record. However, the emotion with which Dallas belts out his lyrics almost makes up for this deficiency.

Regarding the lyrics, much of the content of The Changing of Times was inspired by an incredibly rough series of events in Dallas's life involving his then-significant other; consequently, this album is chock-full of bitterness, despair, and anger, which might make any of us who are tired of angsty relationship songs cringe at first listen. However, when you consider the fact that the guy's fiancée left him, then came back, then changed her mind, while the whole time Dallas is on the road with Underøath, you start to really feel for him. And it's not like this is the only thing harped on throughout the record; "Letting Go of Tonight" is similar in theme to Zao's "Angel Without Wings," describing someone (who in this case sounds like the Lord) who has "made [him] feel alive when death was on [his] mind," while "Angel Below" is a song of rebellion against Satan and "Short of Daybreak" is like a mini-"And I Dreamt of You" with its musings on the girl Dallas is ultimately waiting for.

That's not to say that the angsty songs aren't brilliant. "When the Sun Sleeps" could have fit seamlessly on Chasing Safety with its proto-screamo sound and almost equal sharing of vocal duties between Dallas and Gillespie. "Never Meant to Break Your Heart" leans more towards a melodic hardcore sound while "A Message for Adrienne," easily the album's heaviest track, sounds like it could have been a Cries of the Past b-side at one point in its existence. "The Changing of Times" blends old and new with its catchy-as-all-getout breakdown, Gillespie-aided verses, and explosive finish. "The Best of Me" throws the listener a curveball with its bouncy intro before diving into more aggressive melodic hardcore, making for a grin-inducing contrast. "Alone in December" is a beautiful melodic exploration of Dallas's broken psyche, swelling into a grand climax in which Dallas tearfully screams "God take me because I hate me!" It's truly a moving moment. "814 Stops Today," from which UØ takes their publishing name (and which I have yet to figure out the meaning of anyone out there know?), is a well-placed and appropriate coda to the record, as "Make this my last, and the deepest; I never wanted to leave" probably sums up the record's theme in the fewest words possible.

In the land of giants that is Underøath's collective discography, The Changing of Times stands out as one of the two tallest colossi alongside Cries of the Past. While it might not have had the mainstream appeal of the band's following release nor the legendary, elusive aura of its predecessor, The Changing of Times is nothing short of greatness nevertheless. It's still in print (it was almost released on Takehold, but was licensed out to Solid State, hence its longevity), but if you can't find a copy in stores, look for Play Your Old Stuff, Underøath's contribution to the swath of 3-disc back catalog sets Tooth and Nail has unleashed upon the earth. The times may have had to change, but while it lasted, the first incarnation of Underøath made some truly timeless music.