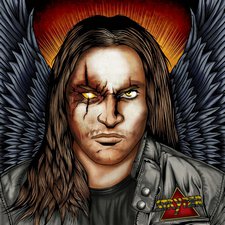 Stryper has been around for nearly three decades and sound as good today as ever. Michael Sweet doesn't seem to have lost anything from his voice and the band just keeps on rocking. Murder By Pride was 2009's offering and was a solid return to the original Stryper sound. 2011 sees the band jumping onto the cover songs bandwagon, but not quite the kind you may think, with The Covering. Stryper, no stranger to controversy, amps it up by covering bands such as the Dio era Black Sabbath, KISS, Ozzy Osbourne, Iron Maiden, and Judas Priest. One may wonder why a Christian band would cover such artists, but Sweet simply wanted to pay homage to the bands that influenced the musical side of their career.

Simply put, Stryper nail these covers. Each one maintains a strong sense of the original, but has Stryper written all over it. "Blackout" (The Scorpions), "Carry On My Wayward Son" (Kansas), and "Breaking the Law" (Judas Priest) are three of the best The Covering has to offer. The most disappointing part of the album is that they decided not to change the lyrics in "Blackout" and left the mild profanity in, "I look around and see this face; what the hell have I lost my taste." It would have been nice to see Sweet try to find a way around the word, or to just pick another song by The Scorpions.

Not only is The Covering a covers album, it is also a concept album of sorts. Michael Sweet explains it by saying, "The concept for The Covering is very powerful and rings true to the power of God's love upon our lives. God's covering is transforming and life-changing and we thought it would be very cool to visually portray that through the new artwork."

To prove that the band is still all about the message of Jesus Christ above all, despite an album full of covers from secular metal bands, they included one original song, simply titled "God." In the song, Sweet proclaims, "God, have mercy on us for we know not what we do. God, dark and blinded we are burning without You, God!" If you have any doubts on what Stryper is about, Michael Sweet has this message, "Even though this has been a record to cause controversy and a select few to question our motives and reasons for covering the songs that we recorded, our faith and beliefs have never been more confirmed and our message is the same as it has always been. We'll go to the grave making a bold stand for Christ and we will never deny that."

Just like any covers album, there are several questions involved. If you are a fan of Stryper, the original bands, or the songs included, this is a can't-miss. If you aren't a fan of one of these things, you may want to think twice. Other than the disappointment in "Blackout," the album is otherwsie clean and safe for all ears. Overall, The Covering is a solid album and one of the best cover albums around. In true Stryper fashion, you "Can't Stop the Rock!"