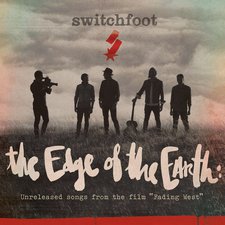 Switchfoot
The Edge of the Earth: Unreleased Songs From The Film 'Fading West'

It's a band that needs no introduction, yet with a new project that certainly does. Though Switchfoot started off the year quite strongly with the film and soundtrack Fading West, a new EP emerged seemingly out of nowhere called The Edge of the Earth, a series of tracks that didn't make the soundtrack's cut. Rather than a throwaway compilation, however, the EP builds a name for itself in surprising ways, giving the band a larger footprint on this year's musical landscape.

If one were to listen to The Edge of the Earth with zero context, it would make for an uncharacteristic listen, to say the least. Its seven tracks don't seem terribly connected, but yet are all tightly produced and complete. It would be tough to guess which period of Switchfoot's history they would fall under, too, though the overall feel of them comes closest to Fading West, as the tracks focus more on overall essence in the vein of a soundtrack rather than studio-based start-to-finish songwriting. When the context is brought to light, then, it makes sense why these songs didn't appear on Fading West, but it's not an uncommon practice for bands to hold onto songs for future album cycles. In this case, then, no standard studio album would make room for tracks like these, and thankfully for Switchfoot fans, the songs get their own spotlight.

The EP starts, oddly enough, with "Fading West," the title track of the album from which it was cut, and from the get go, it definitely doesn't fit the soundtrack's vibe with its "plugged-in campfire" feel. The atmospheric guitars return, however, with "Against the Voices," a track that succeeds with simple truth-telling ("the hardest war to fight is the fight to be yourself when the voices try to turn you into someone else"). It's after these two tracks that the EP really takes the first wild turn. "Skin and Bones" showcases a wide range of Jon Foreman's trademark vocal abilities on top of dirty guitars, harkening back to Nothing Is Sound territory. The appearance of the song on the soundscape is particularly alarming because it takes the EP down a darker alley than is usual for Switchfoot, though it transitions quite nicely to the bittersweet "What It Costs."

For the first time in Switchfoot's history, Tim Foreman takes lead vocals on a song, and he's a perfect fit for the track's take on self-sacrificial love; as a result, "What It Costs" is one of the more memorable songs of the project. A track like "Slow Down My Heartbeat" majors on sparse lyrics, but the murky feel showcases expert programming that knows how to take its time to let the track sink in. It's an opportune track to precede the outgoing "Liberty," a song that explodes triumphantly with "only You can free my soul," and the EP's title track, a ukelele-led song of victory, ends the EP with gusto.

What's almost surprising about The Edge of the Earth EP - and it's the clincher that makes a project like this work - is that it's some of Switchfoot's most novel musicianship yet. Projects such as these are often wastelands of b-sides that may or may not be quality work, and sometimes they just aren't worthwhile. Eastern Hymns for Western Shores (which were b-sides from their Oh! Gravity album), a similar project by the band from 2010, is sometimes seen as the best-case scenario for this type of EP, but The Edge of the Earth is a noticeable step up. Every song feels like it belongs in the Switchfoot discography, even if they're likely to get overshadowed by full-length albums with premiere exposure.

One could look as these songs as merely leftovers from a higher profile album, but that would miss the point. The key lesson to away from The Edge of the Earth is that nothing is ever wasted. One should put their all into everything they do, regardless of the end result. These seven tracks didn't quite fit with the spirit of Fading West's soundtrack, but the songs speak for themselves, and the project is another reminder of why Switchfoot has remained a top-tier band for so long. There's just no mistaking it; The Edge of the Earth is one of 2014's surprise knockouts.

Sort of out of nowhere, with hardly any rumbling of anticipation at all, Switchfoot and Atlantic release a new EP of 7 more songs from the band's 2013 surf-rockumentary (film), Fading West. Several of the tracks included are songs fans have wondered why they hadn't made the full-length album earlier this year, but further examination of these songs may provide some insight. While it would never be fair to call these b-sides by any means, these songs are overall a bit darker in nature--whether musically or lyrically, or both--than the whole of the Fading West album, with the exception of maybe the acoustic-driven, more organic "Fading West" song. Beats drive many of the songs ("Skin and Bones" is ridiculously delightful in this regard), while lead vocalist Jon Foreman's bassist brother Tim takes lead vocals exclusively for the first time in the band's 17-year career on "What It Costs." The song is featured prominently in the film during a very emotional scene between the brothers, and represents a time in the band's world tour when Jon had to go back home to be by the side of his little daughter Daisy who was suddenly ill. Tim's vocals are delicate and fragile, adding to the emotion it represents, with a chilling, soaring chorus, making it a real highlight on the EP. These tracks would have made a fantastic addition to the full album as a "Deluxe Edition" in some form, but alone as an EP, they work better than most bands' full-length albums these days. For those wondering how Switchfoot made the pop jump from the edgier Vice Verses to Fading West, The Edge of the Earth helps fill in the gaps a bit more naturally. - Review date: 9/7/14, John DiBiase

Switchfoot is what you hope to see when you hear good music: 5 guys that love each other and make music for the beauty of it. With their latest EP, The Edge of the Earth, they have given fans what they so desperately want/need - the missing songs from the Fading West film. Friend of the Foot favorite "Against the Voices" finally makes its recorded debut with the same kind of treatment "Thrive" received when it was recorded for Vice Verses. The track has more kick and girth to it without removing the heart of the song. "What it Costs" showcases Tim Foreman's beautiful yet vulnerable voice - it's a sound resembling the likes of vocalists Justin Vernon of Bon Iver and Ben Gibbard of Death Cab for Cutie. I'm not saying that he's a dead-on match for those vocalists, but it's that softness and gentleness of the voice that he resonates. No doubt, the concluding title track, "The Edge of the Earth," is one that I wish had made the final cut for the Fading West album, but has a chance to truly shine with this release. It truly captures that west coast sound - if the Beach Boys were a new band, their music would sound like this. Honestly, fans and newcomers will both find something special with this release. And no doubt, this is proof that the guys in Switchfoot care about their listeners, the Fading West era may be coming to end, but the music lives on. - 9/15/14, Ryan Barbee of Jesusfreakhideout.com