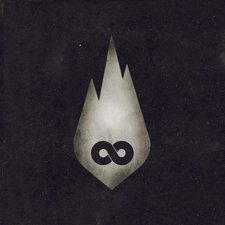 Thousand Foot Krutch
The End Is Where We Begin

More and more bands all the time are making the switch to the independent ranks, and Thousand Foot Krutch is one of the more recent bands to take up this opportunity. With a fanbase still intact that's willing to listen, the creative control has never been in more reachable grasp. Once they made the move, they crafted The End Is Where We Begin by themselves, and one Kickstarter campaign later, the album has been unleashed. The result doesn't disappoint.

Upon only a few listens, the noticeable problems with The End... become quite clear. "The Introduction" and "Outroduction" bookend the tracklisting, but both feel very pointless and easily skippable (though "This is a Warning (Intro)" proves to be an effective build-up for the massive "Courtesy Call"). Vocal effects can sometimes be hard to take completely seriously, and some goofy lyrics make their way into the mix a little too often ("don't play me like a 3DS" from "I Get Wicked" is no doubt an easily identified example). Compared to the mature songwriting of the band's last album, Welcome to the Masquerade, there's a seriousness that's been taken down a notch from their last effort; tracks here and there don't feel quite as dynamic in their construction as one would anticipate from these veterans, leading to a sometimes tired result. Masquerade was a hard act to follow, and The End... may not quite live up to its predecessor's grandeur.

This isn't to say that The End... is a bad, or even a mediocre, record; in fact, it's quite the opposite. With all the perceptible issues with TFK's latest venture that one could pick apart, it's still a very balanced rock record, far and away above the market's norm. While Welcome to the Masquerade went out on a limb with its flat-out modern rock approach, and indeed, it was the finest approach TFK ever recorded, The End... is a natural progression, mixing together the distinct styles of Masquerade and The Flame In All of Us. As a general rule, however, TFK has gotten closer to their roots; Trevor McNevan's rapping is back and in fabulous form, and while seamlessly strewn together with singing, those who missed the raps from the past will be overjoyed to hear it again after their absence.

"We Are," "Let the Sparks Fly," and "Courtesy Call" are the three hard-hitting rockers on the record that work the best, combining intuitive guitar riffs with McNevan's aggressive vocals that excellently balance fun and solemnity. "Light Up the Sky" does sound very similar to a Rage Against the Machine track, but it's distinctive enough to stand on its own, and it shows the band's willingness to step out of their own formula. "Be Somebody" is this album's "Forward Motion," combining hard rocking instincts with heartfelt lyricism.

Every TFK record has a couple ballads thrown in for variety's sake, but here they feature some of the best songwriting found on The End Is Where We Begin. "All I Need To Know" hones in on trusting God in the face of uncertainty ("I don't know which way the wind will blow/but You're here with me, and that's all I need to know"), and "So Far Gone" serves to end the album in worshipful form, basking in the glory of Christ ("I want to be so far gone in You.../I want to be lost in you like a ship in the night"). These are the songs that make the album more than just hard guitars and growling vocals; they round out the final product to show many emotions and grip the listener in turn.

At this point, Thousand Foot Krutch have proven themselves to be reliably accomplished in anything they release, and now back in the independent ranks, their potential for excellence has only become higher. After Masquerade's becoming the band's magnum opus, The End... perhaps isn't quite up to par with what many fans might have hoped, but every listen improves upon the next, which is the mark of a truly enjoyable, well-executed record. Even without a label's support, Thousand Foot Krutch has more than proved they are still a force to be reckoned with in the rock circle with The End Is Where We Begin. The Masquerade may be over, but the afterparty has only just begun.

Coming off their arguably strongest performance yet, Thousand Foot Krutch launched a successful Kickstarter and is now independent for the first time in over a decade. On The End Is Where We Begin, TFK obviously uses their freedom liberally, but the result leaves the album as a whole feeling more like a disjointed collection of songs than a complete record from beginning to end. The first six songs feature several big bass, big guitar rock tracks that act as fist-pumping anthems but not as epic rock songs heard all over Welcome To The Masquerade. Crammed in the middle of those tunes is the title track which flaunts a good chorus, but it eventually lacks the excellence that all TFK title tracks have had up until this point.

The fine ballad, "Be Somebody," begins a nice string of songs that make the album interesting. The terrific, cello influenced "Fly On The Wall," the harder "Courtesy Call," and the best overall rock song "War Of Change" add some much need diversity late in the album. A downside to the record is the songwriting isn't nearly as solid as it usually is on a TFK project. The metaphors that are frequently bounced around are tiresome and the mentions to the [Nintendo] DS and Peter Parker are more lame than inspired. Still, McNevan's earnest desire for God appears on "So Far Gone" and "Be Somebody" ("So when they say they don't believe/ I hope that they see you in me").

The End Is Where We Begin is a pretty good rock effort from the band who knows how to do it best. However, minor miscues and weaker than average songs pile up, and when compared to their previous outing, Thousand Foot Krutch's new album just lacks the creativity and intricate rock tracks that has made the band so good in the past. - Nathaniel Schexnayder, 4/15/12