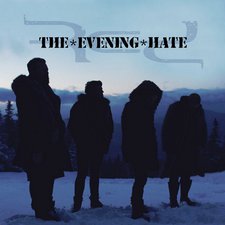 
With nearly two decades of music under their belts, Red have found themselves in unfamiliar territory. They have branched out to make their own label to showcase this new sound and vision. With the release of The Evening Hate EP, it seems they have found it. Their latest project has brought with it a new hope for Red fans. With whispers of the group coming to an end after "Gone," it's safe to say we are in for a new, more aggressive and creative chapter.

Starting the album off is the title track. For those of you who know Red and their sound, you may find a few differences here but the basis is still the same: in-your-face heavy and epic rock with the underlying message of faith and hope. With "The Evening Hate," we are painted a picture of a soldier (or soldiers) pinned down in their trench waiting for the inevitable. The term was coined by WWI soilders in 1915. The artillery often opened fire in the first few hours of darkness when enemy soldiers would be going on patrol, or moving from the frontline to the reserves; this became known as "the evening hate." The song captures the constant hits and attacks of life and from the enemy. It brings to my mind passages from C.S. Lewis's "The Screwtape Letters," with the enemy using attacks when we are least expecting them, remindiing us that, in this fight, we are always on duty and must be ready for war. Coupled with the conceptual music video, the song will truly make a mark and will be held as one of Red's best singles.

We head back to a more familiar Red vibe with "From The Ashes." This song sounds like it would have fit right in on Until We Have Faces. The mix of "Feed The Machine"-type chugging rifs, and the melodic choruses of "Buried Beneath" or "Let It Burn" from that album, find a place here. It's the perfect companion to heighten the first track and really brings the entire album together. Lyrically, the song faces the issues with being held down/back and repressing who you are or what people think about you. Michael Barnes really shine vocally on this EP and shows of his talents.

Midway through, we find the cover of "Hemorrhage" from Fuel. I have never been a big fan of them, but I know of this song. If you are a Fuel fan, give it a listen. Finally, we come to the last two songs on the album, acoustic versions of "The Evening Hate" and "From The Ashes." Each track shines in its own way, making it the perfect way to end this brief EP.

Red gave us everything fans wanted here: two original face melters, a cover song, and two alternate/acoustic versions. This album left you wanting more, but yet satisfied with what we were given. The future is bright for Red and you should be sure to look out for more new material from them in the coming year.

In the strictest sense, there isn't anything entirely new on the new Red extended player. "Hemorrage" is a cover of the 2000 song by the post-grunge band, Fuel. The Red-penned tracks, "The Evening Hate" and "From the Ashes," were both released as singles this summer. And the remaining two cuts are alternate versions of the aforementioned singles. Once you get past that point, though, what's left is, to varying degrees, pretty impressive. The standard iterations of "The Evening Hate" and "From the Ashes" infuse the band's characteristically sludgy, slightly-dissonant rhythms with a better than average set of hooks and just enough orchestration to keep fans of the first two records happy. The alternate takes - so often tacked onto projects like this merely to entice diehard fans - turn out to be even more noteworthy since their stripped-back textures allow for a better appreciation of both the subtleties of the songs' underlying melodies and the power and clarity of Michael Barnes' vocals. The mostly straightforward Fuel cover, though, is where the band really comes into its own, thanks to Barnes' passionate (but not overly so) delivery and a beautifully sublime instrumental accompaniment that may well make some listeners wonder if this sort of melodic alt-rock isn't where the band's underlying strength truly lies. - 10/17/19 Bert Gangl