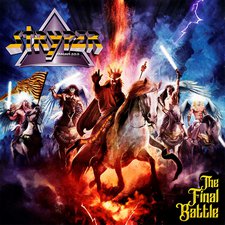 
Stryper, the veteran hair metal aficionados who have found new life in the new millennium, had the appearance of being unstoppable with a steady stream of albums since 2005. But in between their last album (Even The Devil Believes) and their latest (The Final Battle) nearly every member in the band had some sort of medical emergency develop. This left fans wondering whether the group would be able to continue with their ministry and music. But lead singer and guitarist Michael Sweet persisted and, in between surgeries for a detached retina, wrote the 11 songs that comprise their new album.

With an epic title like The Final Battle and apocalyptic cover art to boot, one would think this may be an album with a more eschatological message. While there are a couple tracks that either look to the end ("Ashes to Ashes") or are, in fact, about the last days ("Out, Up & In"), this is not a concept album about Armageddon. The standard fare of topics are all covered here. You have evangelistic tracks ("Transgressor," "Same Old Story," or "No Rest for the Wicked"), songs for Christians ("See No Evil, Hear No Evil," "Rise to the Call"), and even a pair of love songs ("Near," "Till Death Do Us Part"). One standout track feels a little more personal than usual in "Heart & Soul," which considers how the passage of time can wear down zeal and yet that doesn't mean it's all over. The lyrics are all on par with what Sweet has been churning out for the past decade, and by now, a pattern is developing in what he wants to address. This isn't bad, but it does add to the feeling of getting the same album over and over again.

Musically, they continue to rock hard and move at a breakneck pace. Keyboards add accents here and there, and an acoustic guitar can be heard on "Near," but overall any differences between The Final Battle and their previous offerings are in the subtleties of the musicianship. The sameness and familiarity do not make it less entertaining, though. These guys can still rock like it's the '80s and it's not only impressive but makes it worth the price of admission. It would be nice to see the guys incorporate flavors of other styles, but if the formula works, will they feel the need to change it?

In my review of 2020's Even the Devil Believes, I wrote, "While it's not surprising that a band that's been around as long as Stryper starts using similar melodies or structures, it may be time to do a little experimentation to keep things from getting stale." In looking back on that album and recently giving it another listen, I found I had forgotten most of the songs. I'm curious if The Final Battle will have a similar fate. As usual, it's a competent record full of truth and high entertainment value. But, unless you're listening for the nuances, it will feel like the last 4 or 5 Stryper albums. Fans will enjoy it (as I did), and Stryper at this point is living for their fans. Still, it would be nice to hear something fresh and innovative from the veterans before the final trump sounds.

They're the reigning kings of Christian hair metal, and in the 2000s, they're as prolific as they were in the 1980s. Stryper's latest album, The Final Battle, continues their run of albums that blend that classic hair metal sound with modern hard rock production. The way you've felt about their last few releases will almost certainly be how you feel about this one, with its guitar-heavy rock and Michael Sweet's signature wailing. The band certainly doesn't try anything new here, and not everything hits on the same level (for instance, "Transgressor" is a pretty lackluster opener), but the album still has its gems. "Same Old Story" has one of the catchiest choruses of the bunch, while "Out, Up & In" has a toughness to it that sounds good now and would've made a killer rock radio single in the '80s. Throw in "Heart & Soul," "The Way, The Truth, The Life," and album highlight "Till Death Do Us Part," and you've got a pretty solid album. It may not be on the same level as my personal favorite, No More Hell To Pay, but it's a good mix of modern and classic Stryper, and the core of their fanbase should be more than pleased. - 10/27/22 Scott Fryberger