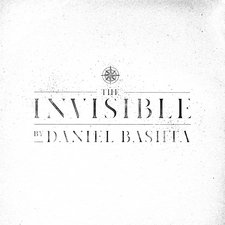 A few years ago, Daniel Bashta put the pen to paper and wrote out a little song called "Like a Lion." Today, the song has become a huge success as a worship anthem, but the song's author remains virtually an afterthought in most minds. Nevertheless, the popularity of the song helped land him a contract with Integrity and, in September 2011, Bashta released his epic The Sounds of Daniel Bashta. It was an album with a loud and proud message of redemption and salvation filled with relentless passion, powerful songs and strong, declarative lyrics, but it retained that fresh sound and variety lacking on so many other worship releases. Now, Bashta, with an established fan base and a more recognized name, has brought us his newest worship venture, The Invisible.

Listening to The Sounds was almost like listening to a man standing in the middle of a thunderstorm with arms raised high and singing at the top of his lungs to music eminating from the clouds. The Invisible is a similar experience, minus the storm (but still with the thunder). On the plus side, this allows him to control his music more; the songs are definitely more structured, the experience is much less like listening to freestyle expression, and the songs are kept from being too overwhelming or going on for too long. Not a single song on The Invisible is longer than 5 and a half minutes, while The Sounds had 8 that were longer than that (plus two more within ten seconds of that mark). On the downside, that raw passion and expression is what many loved about his music in the first place, and this album might make them think that Bashta is taking a step backwards in terms of stretching himself for a more original sound. Indeed, both perspectives certainly have their merit, and whichever perspective one takes will determine how much they love this album. But taking The Invisible for what it is, there is not much wrong with it. The sound of the album, for lack of a better word, is big; it is emotive, dynamic, voluminous, and dripping with passion. Bashta's music is driven by piano, orchestral elements and big percussion, and more often than not he has a choir supporting him. It is the type of sound that would be borderline overwhelming to hear live, and I can only imagine how exhilarating that experience must be.

The album opens with one of its biggest highlights in "I Want It All (Just Give Me Jesus)." The title may deceive a newer listener into thinking this is typical, unoriginal worship fare, but instead it is a profound and desperate plea, as Bashta sings "Give me the real thing, not just religion/ stir up my passion with more of conviction/ I want it all, not just a portion/ give me your presence, not just some feeling /I'm just looking for the real Jesus." This theme of desiring and being desperate for Jesus runs through the entire album and ties all the songs together in theme. The title track, "Praise the Invisible," continues that theme and serves as the album's most straightforward praise and worship song. "Deliver Us" takes a step back volume-wise and gives the listener a breath leading into another worship anthem in "Let Hope In." The much more acoustic "Undone" gives the orchestra a rest and prominently features a banjo alongside the more traditional guitar and piano, but it still retains its big sound during the chorus thanks to the thumping percussion. "Great Is the Lord" and "Suddenly" are two more worship anthems continuing in the album's theme of desperation. These lead into "In the Ruins," which is the album's darkest song, as it addresses how God will still be present even as the world crashes all around us. Then, for some inexplicable reason, Bashta wrote the perfect closing song for the album in "By My Side," and then proceeded to NOT close the album with it. Seriously, "By My Side" works perfectly to wrap up the album structurally, thematically, and musically, but instead Bashta added one more song ("Behold the Lamb") which could have easily been played earlier in the album and not have missed a beat. To be fair, "Behold the Lamb," which is a big, epic, slow-building, lyrically simple prayer-like song, certainly isn't a bad closer in itself (it even ends with the word "Amen"), but then it forces "By My Side" to be included earlier in the album, and they don't work quite as well being back-to-back to wrap everything up.

As far as the songwriting goes, in all honesty, the words and phrases themselves that make up the lyrics are not really anything we haven't heard before. Bashta certainly shows glimpses of the creativity he constantly showed in The Sounds (most notably "In The Ruins" and "I Want It All (Just Give Me Jesus)"), but for the most part, it is pretty straightforward. But not all great music (and in particular, great worship music) needs to have profound and creative lyrics that make us think and appreciate God in newer and never-before-thought-of ways. One of the qualities of a great artist is the ability to take the simplest of words and phrases and still turn it into beautiful and profound music, as well as an intimate walk with our Savior. Unfortunately, so many modern worship acts exclusively try to do that over and over again and still provide us with lackluster, repetitive, and/or tiresome results. But thanks to Bashta's genuine heart of worship and his own unique set of musical skills, this formula definitely works for him. Take "Praise The Invisible" for example; the song, which is the album's lead single, only has two verses (the chorus and the bridge). He uses fewer than 40 different words in the four-minute song, the lyrics of which are a paraphrasing and expansion on 1 Timothy 1:17 ("Now to the King eternal, immortal, invisible, the only God, be honor and glory for ever and ever."). These lyrics are put to music that sets the mood, follows a general structure, and does not overpower the lyrics (not that lyrics like "We lift our hands up higher/ We lift our voices louder/ To the only wise eternal king" can actually be overpowered), but is still has a sense of artistry and genuine effort behind it. The final result is a song that will doubtlessly be used in church worship services, but is not trite, irreverent, cheesy, or boring, but is, in fact, great worship music.

For how big of a scale The Invisible has, it is amazing to think that The Sounds had an even bigger one. In a way, this album serves as The Sounds' baby brother, so to speak. It is more simple and straightforward both musically and lyrically, and is a full twenty-two minutes shorter. Is The Invisible better than The Sounds? Well, it is certainly a progression, and it is more accessible, but that question will definitely depend on the listener. But one thing is certain: for those that are looking for a moving worship album with a clearly different sound and feel than the usual fare, this is certainly a good option to check out.

It was long ago that listeners heard The Sounds of Daniel Bashta. His hit "Like A Lion" is now being sung in churches across the nation and even the world. However, with Bashta's follow-up, The Invisible, he may have slowed down the momentum just a pinch. Bashta's songwriting and orchestration of his music is never short of brilliant, but its delivery seems to have suffered. The creative explosion that encapsulated his previous effort was captivating to say the least, while this venture seems to have tamed severely. Instead of the insane artwork, the poetic interludes, the climactic builds and eclectic aggressiveness, the listener will receive more palatable sound that many AC radio stations love. This is not altogether bad; it's just not what is expected when it comes to Daniel Bashta. Regardless, fans and newcomers alike will be pleased with a number of selections from the album. The congregational "Undone" is sure to encourage listeners to sing-along. "By My Side" features some eloquent and transparent lyrics that reflect the more intimate relationship that the believer has with Jesus. Nevertheless, "Deliver Us" is without a shadow of a doubt some of Bashta's greatest work. It's in the simplicity of the orchestral strings and the beautiful harmonies that give the song its musical richness. Sadly, the album is short, with only 10 tracks, and does not have the explosive nature that its predecessor had. Still, listeners should find something good to listen to and heartfelt lyrics toward the incredible God that we serve. - Ryan Barbee, 2/4/13