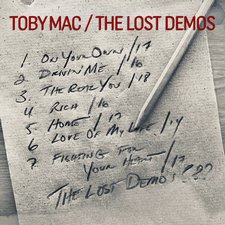 
It has long been said that much of the best music is born out of difficult times. While the songs on his latest outing were, technically, composed and recorded prior to the COVID-19 outbreak, it was the pandemic, itself, that inspired Christian hip hop's most famous son, Toby McKeehan, to spend a portion of his newfound free time rooting through his stash of old laptops and hard drives to cobble together The Lost Demos - an EP's worth of demo tracks that, for one reason or another, never managed to make their way onto to any of his proper projects.

Of course, many times when a certain section of an artist's work goes unreleased, it's because the material in question isn't nearly up to snuff with that which eventually makes its way onto radio and into the hands of consumers. Not so this time around. From the breezy rhythms and indelible melody of the stellar opening number, "On Your Own," to the terse, dance-friendly strains of the likewise superb final cut, "Fighting for Your Heart," the most recent TobyMac offering finds its author at an absolute late-period peak. To be sure, the latest showing is every bit as strong as anything he's put out over the course of the last decade.

As its title implies, the compositions on the album are in demo format. But, for all but the most trained of ears, any difference between these tracks and fully-gussied-up TobyMac fare will be all but imperceptible. And, even for those with ears sensitive enough to suss out these newly-released ditties as rough takes, it may well be that their less-than-finished quality turns out to be their strongest selling point. Indeed, compared to the largely homogenous, overly glossy pop/worship that has come to dominate the airwaves, the comparatively unfussy aesthetic of these songs is positively refreshing by comparison.

Perhaps not surprisingly for an effort comprised of ostensible misfits, Lost Demos makes a fairly eclectic statement. The laid-back, slightly reggae-fied textures of the acoustic guitar-driven "Drivin' Me," for example, are hardly a copy and paste of the far more insistent beats that propel the soaring, yet somber, "The Real You," which was written for McKeehan's late son, Truett. In the same way, the celebratory, hands-in-the-air pure-pop ditty, "Love of My Life," shares only a passing resemblance to cuts like "Rich," which lean in a far more hip-hop direction. But while each of the entries on the album are more than singular enough to ensure that no two of them sound alike, they nevertheless slot together into a whole that is every bit as seamless as it is diverse.

Ironically enough, odds and ends collections like this one often end up taking their place among a given artist's most compelling works (Sticks and Stones, anyone?). That said, Demos probably won't provoke hordes of Mac devotees to toss out their Free at Last CDs or delete Welcome to Diverse City from their digital playlists. Even so, it is still nice, after spending so many years edging ever closer to the middle of the musical road (and arguably sacrificing a fair amount of his funk in the process), to hear the former dc Talk front man serving notice that he's not ready to roll over and play it completely safe just yet - a declaration that renders his latest project as reassuring as it is impressive.