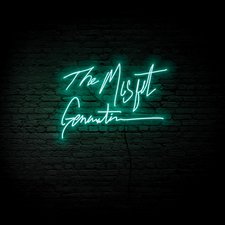 
In case you have been living under a rock for the past few years, Social Club Misfits (formerly known as "Social Club") has been turning heads in the CHH world with their unique reject-seeking independent fueled style of hip hop. The Miami-based duo dabbles in humor, seriousness, and acceptance, all while spitting fire over solid production, making for music that you'd be hard pressed to label properly. They recently signed a deal with Capitol, and this EP is our first taste of what this new relationship will foster. Will we see more tracks like "Cops," "Coogi sweater," and "Steinbrenner," which have quickly become fan favorites? Let's hope so.

This short sampling starts off with "Wavemasters" and you're greeted with a track in which Marty and Fern kill it lyrically in flow while delivering a message to all who feel unloved or unwanted in this world. "Marriage Goals" follows suit with a great song hitting on the personal side of the duo's dating and marriage life, while "Kumbaya" is a powerful song that hits home on real life struggles. "Courage" features "Tree Giants" with a unique blending of styles, while "The Misfit Generation" is the perfect ending for a Social Club Misfit project. The track is a powerful, moving, and goosebump-giving track that reaches out to all of the misfits and misunderstood in this world. The final song in this five track EP delivers the full Social Club Misfit message in four minutes.

As far as EP's go, this is exactly what I was hoping for and current SCM fans will certainly dig it. The beats are solid throughout and Marty and Fern rhyme as well as they have on any previous release. I am excited for a full length release and to see what the misfit gang does next. Social Club is the best!

The Misfit Generation introduces Social Club's new moniker, Social Club Misfits. The EP starts out in excellent fashion and features Aha Gazelle on "Wavemasters." Aha had an impressive, and under the radar, album himself last year; his appearance here is very welcomed. Sadly, things immediately take a down-turn with the auto-tune heavy "Marriage Issues." It's an attempt to be a little lighter, but it falls flat. "Courage" keeps the light feel going, but is a more successful, and enjoyable, attempt. "Kumbaya" is next up and doesn't hit as hard as the opener, but is an improvement over the previous two. The EP closes out with another softer song with quite a bit more auto-tune. This track is probably the heaviest from a lyrical prospective and asks the question "Have you ever felt like suicide was the way to go." This one undoubtedly encompasses what Social Club is now embracing as "misfits."

Overall, the EP is a bit underwhelming. Aside from the hard-hitting "Wavelengths" and the more touching "The Misfit Generation," the tracks just don't really stand out. On top of that, auto-tune attributes greatly to some of the frustrations with the other tracks. Social Club Misfits seem to be on point more when they're going hard like on "Wavelengths," or being a little more laid back and fun like their appearance on Derek Minor's "Party People" last year. The Misfit Generation is worth a listen, but don't expect to have your mind blown. Hopefully the guys come back strong with their next release. - Review date: 5/10/16, Michael Weaver

Capitol CMG has finally realized that there's money to be made in the Christian hip hop market. Not that they're hip hop aficionados by any stretch of the imagination, but they do have an idea of what will sell. They signed NF a couple of years ago, and he's now one of the biggest names in the industry. Next up: longtime independent heroes of the genre, Social Club Misfits. With a pretty solid following already, Social Club Misfits are putting their name even further out there with The Misfit Generation. To those worried that the duo signing to a label would put constraint on their overall style, fear not: the only thing that's changed is the name (the addition of "Misfits" after "Social Club"). That being said, we're treated to a mixed bag, as with any previous Social Club release. Martymar and F.E.R.N. are talented rappers and, like Jesus, they have a heart for winning souls, particularly "the least of these" (aka, the misfits). In these ways, The Misfit Generation scores major points. Where the EP lacks is in some of the music and guest appearances; autotune is here and it is abundant, both in rapping and singing. Providing no artistic benefit that I can find, it's only slightly bothersome when it's used during rapping, but it makes the hooks of "Kumbaya" and "The Misfit Generation" unbearable. There's still plenty of merit here, and most of the EP is worthwhile to listen to, so I wouldn't recommend passing it up if you like what the radio plays these days. - 4/30/16, Scott Fryberger of Jesusfreakhideout.com