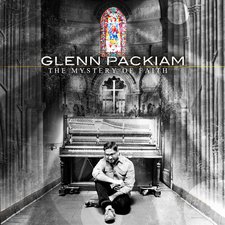 "For decades, church leaders told us that how we worship is simply about forms and methods and that we should adjust them based on the people we want to reach. But for centuries, the Church Fathers told us that the way we worship and pray together becomes the way we believe, and that we must make sure that everything speaks of Christ and the Gospel. So maybe it's time to take a closer look at what we say, and sing, and do each week."

This is a quote from Glenn Packiam, one of the founding members of Desperation Band, from the Integrity Music press release for his new solo EP, The Mystery of Faith. The EP is an intriguing concept; a worship project that incorporates good theology and is inspired by ancient church practices. One may wonder how different a concept like this would be from the often-times anemic worship releases that flood the market. In addition, the album is a companion to his book of the same title (being released the same day). However, the end result is a mixture of disappointment with awe and admiration.

Here is the thing; this project doesn't sound any different, musically, than any other worship project out there. The project is six songs with two spoken pieces. The first is the celebratory "Victorious God," followed by the anthem "For the Life of the World," both of which can find a home in any worship service. In fact, all six of these songs can find a home in any worship service with the usual worship instrumental setup. They are certainly full of spiritual truths and declarations of our faith and human frailty, but they don't really delve any deeper than that. And seeming thrown into the middle of the album are a recitation of the Nicene Creed and a confession prayer. Certainly, as far as congregational worship goes, these are far from bad songs. They are, in fact, pretty decent. Upon learning of the project's concept, I had gotten the impression that this album would be something exotic or medieval, or theologically dense with thought-provoking concepts (something like the Irish band Iona). So I went into the album expecting something like that, and it didn't deliver. That's what was disappointing.

Then I read the companion book to the album. It is a pretty quick read that shouldn't take more than a couple of hours, at most, to read in one sitting. In the book, Packiam basically talked about his personal examination of the concept of "The way you worship becomes the way you believe" (from the Latin "lex orandi, lex credendi"). In short, he basically learned that throughout the history of our faith and our church, our expression of worship has been tied to the narrative of our faith, and that through our expression of worship, we retell that narrative; that the triune, all-powerful and infinitely good God freely gave grace to us--the sinners eternally separated from Him--to those who accept it. One such story he tells in the book is of his visit to an Eastern Orthodox Church in which the entire service, from their surroundings to their worship, from the moment one walked in to the moment they left, was a part of that narrative of grace. And it was a practice that has been in place for a period of years numbering in the thousands. And ultimately, Packiam implemented a narrative structure into his own church that he is the worship pastor at (he goes into detail in the book about the structure), and this structure is realized musically through his companion EP.

After reading the book, I listened to the EP in a new light. And yes, there is definitely a structure here. The album begins with a celebration of God, followed by a statement of our faith, confession and humbling ourselves in worship before God, spending time in community with God and each other, and ultimately ending with the "mystery" that "Christ has died, Christ is Risen, Christ will come again." One can definitely tell, in hindsight, that there was indeed a LOT of lime, effort, and thought that was put into The Mystery of Faith. And it does amaze me about the amount of time and effort that was put into a musical project that is only 27 minutes long.

BUT, all that said, the whole concept behind the album is far from obvious from just listening to it. Musically, there is nothing special here. Those looking for something special will be quite disappointed. It is clear that Packiam's objective for The Mystery of Faith goes far beyond the music, but in all honestly, the same can be said about almost any worship release. I admire Packiam for trying to make the music more meaningful than the music he made during his time in Desperation Band, but the music really doesn't sound any different. I see this as a project that got pretty much everything right except the fact that, from a critical standpoint, what really matters, which is the music itself. I can't recommend this EP to anyone who would only ever listen to it casually and not think a thing about it; if you get this EP, you need to read the book, you need to delve into Packiam's journey, and you need to understand why Packiam does everything he does on this album. Otherwise, this EP is very likely to get lost in the shuffle of your music collection.