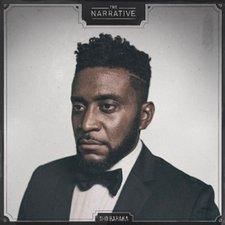 
If you're a fan of Humble Beast, you may have noticed that the label hasn't put anything out this year so far. In fact, it's been over a year since their last release, which was JGivens' Fly Exam. The good news about this is that they've signed a deal with Fair Trade Services to offer national distribution for all their releases without sacrificing their "freely given" business model. This means an increased likelihood of finding Humble Beast releases in your local Christian record store and hearing their artists on national radio stations. The first release under the Fair Trade banner happens to come from their latest signing, the veteran Sho Baraka. Nearly four years after independently releasing Talented Xth, Sho is furthering the conversation with The Narrative.

Now, Talented Xth was released a couple of years before "black lives matter" became universally-known terminology, but the overall message coincided with the main idea of the movement, particularly the powerful song "Jim Crow." The Narrative tackles the topic again, but does so in a graceful manner. "Maybe Both" finds Sho getting more worked up about the issues than the rest of the album, but he handles his message the way a Christ-follower should. I had to digest some of the lyrics for a bit before understanding their context, but knowing that some of it is satirical is helpful ("Jefferson and Washington were great peace pursuers, but John Brown was a terrorist and an evil-doer, oh yes, God bless the American Revolution, but God ain't for all the riots and the looting"). It's not a perfect analogy, and I don't believe Sho is condoning rioting, but it fits the vibe of the song, which is to call out hypocrisy and double standards, both in the world as well as in the Church.

The latter half of The Narrative ends up being the heavier, more serious half. One of the more touching songs is "Fathers," where Sho gives his children advice as a loving father; he talks to them about how to grow up as a man and woman of God. It's all great advice, but the following lyrics particularly stuck out to me: "You're beautiful, I will always remind you, never let the culture's idea of beauty define you, baby girl don't be easily impressed, stay clothed in righteousness 'cause it's harder to undress." The song goes hand-in-hand with the previous track, "Words," which gives us a look into Sho's struggle to live with a child with special needs. Less heavy and more serious, one of my favorite tracks is "Road To Humble," which chronicles Sho's journey from an underground rapper to his new place on Humble Beast. But it's also a bit of a play on words, as it also recounts his struggles with pride and learning to be a humble man.

The music of The Narrative is simply fantastic. Lots of jazz and r&b influence made its way into these songs, bringing a great deal of real, organic instrumentation with it. It makes sense, what with the numerous appearances from James Portier who, together with Sho, makes up the lead of the side project Louis Portier, a jazz/hip hop duo of sorts. "30 & Up" is one of my favorite tracks on the album, with a danceable, brass-laden beat that sounds like a combination of Stevie Wonder and Justin Timberlake. "Kanye" starts with a black gospel chorus and matching, lively piano. A Roots-esque, mid-tempo beat takes over from there, and Jackie Hill Perry joins Sho for the second verse. "Love" is another highlight, and it finds Sho tapping into a 1950s pop rock sort of sound for the backbone of it. A love song like only Sho Baraka can come up with, it's fun, melodious, and witty ("I'm eying you, I mean you and I, it's hard to stay grounded when you know you fly" and "Translate your body language every time you move" are a couple of lines that really stuck out to me). The end of this song flows very smoothly into yet another album highlight, "Here." Featuring former labelmate and fellow 116 Clique member, Lecrae, "Here" highlights the importance of choosing love over hatred and reaching out to the outcasts in society with the Gospel.

The Narrative is one of Sho's best albums to date. His rather unique style shines as he raps over terrific beats with passion for his message. It's also clear that he's having a good time in some of the more fun songs. In addition to this being one of Sho's best, this album is also in a strong lead for the best hip hop album of 2016. Of course, worthy contenders have been pretty scarce this year so far, but that only helps The Narrative to shine that much more. I really can't recommend this album enough. It's available everywhere (including for free, as always, through Humble Beast's website), so it's a no-brainer to obtain a copy in some way, shape, or form. I anticipate this to be high on my year-end top ten list.