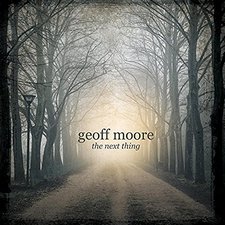 Geoff Moore
The Next Thing


Like Tom Petty, Michael Stanley and John Mellencamp before him, Geoff Moore first came to true prominence playing no-nonsense, straight-ahead heartland rock on his first few albums with his backing band, The Distance. And, like Hawk Nelson, Kutless and the Newsboys after him, Moore eventually traded in his rocking ways to craft the sort of kinder, gentler fare that ultimately took over the Top 40 charts on inspirational pop radio.

His latest effort continues the trend, offering up a tight ten-song set of lite-pop compositions and ballads that round off any harsh musical edges and push Moore's warm, robust voice to the forefront. Listeners who took a shine to the bracing hard rock aesthetic of early Distance-based works, like A Place to Stand or Pure and Simple -- or perhaps the comical power pop approach of latter-day Distance Records like Evolution...Redefined -- will find little of either of these this time out. And, truth be told, after a point, the overabundance of languid, mid-tempo numbers like "Broken for Love's Sake," "Lights in the Desert" and "My Longing for You" does cause the songs on the second half of the album to bleed together into a pleasant enough, but not very memorable, whole.

Its somewhat homogeneous musical portion aside, Moore's singular ability to weave deep and poignant messages from the simplest of stories and distill deep spiritual truths down to an easily-relatable essence seems to have only grown stronger with age. And, musical gems like the ethereal, reverb-laden title cut and the beautiful closing "Jude Benediction," the latter of which stands as one of the most transcendently moving cuts Moore has ever recorded, show that, while his musical inclinations may have once and for all taken up residence in the adult contemporary domain, the deeper essence of what made his early efforts so beloved to so many remains intact and undimmed for those willing to dig deeply enough to find it.

It's been quite a while -- 19 years to be exact -- since Geoff Moore and the Distance's swan song, Threads. That album contained one of my all-time favorite Geoff Moore & the Distance jams in "I'm Free" (a cover of The Who's hit). It's been some time since 1997 and Geoff Moore has been quietly releasing intendent albums along the way. The Next Thing is the newest release for the CCM veteran. The album is largely acoustic with the track "Leave It" or "All You Can Do" being the biggest vestiges of The Distance on the album. Moore's voice is sounding a bit more weathered these days, but it fits so perfectly with the vibe and sound of the music. The folksy feel of the music and Geoff's songwriting makes the album standout a bit more from the typical CCM masses. Some of the highlights from Geoff's latest outing are undoubtedly "The Well Digger," "Your Way Out," "Leave It," "Broken for Love's Sake," and "Jude Benediction." The mellow nature of the acoustic guitar makes The Next Thing a perfect album to put on for background music, or something to play for some solo reflection time. Geoff Moore has been an active CCM artist for about 36 years now and his experience is on full display; his strength as a songwriter has only grown. While it was a fun song, you won't anything cheeky like "Home Run" on this album. Fans of Geoff from the past will certainly want to give his newest venture a spin, but newer listeners who enjoy a good acoustic album will also find a lot to enjoy. Beautiful music coupled with deeper reflective lyrics make The Next Thing an album worthy of your time. - Review date: 9/19/16, written by Michael Weaver