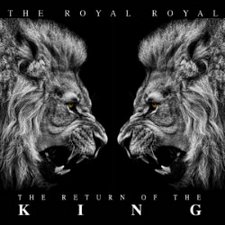 The Royal Royal
The Return of the King

In the first chapter of the book of Ecclesiastes, the author puts forth the bold, yet surprisingly simple, theory that, when all is said and done, there is "nothing truly new under the sun." While it's probably safe to assume he wasn't thinking about the current state of the contemporary Christian music landscape when he penned his now-famous adage, even the most casual of listeners, if they're being completely honest with themselves, would have to confess that the saying applies, at least loosely, to the overriding sense of sameness that blankets the better portion of the songs currently perched in the upper regions of the inspirational pop Top 40.

The good news, though, is that this pervasive homogeneity, at the very least, served to make the full-length debut from Gabriel and Nathan Finochio (collectively known as The Royal Royal) appear that much more distinctive by comparison when it first saw the light of day in the fall of 2012. To be sure, while the album's basic elements - stripped-down, bare-bones acoustic folk and frenetic, synth-driven neo-new wave - were hardly hitherto unknown quantities, particularly for the older members of the listening crowd, the way in which the Finochios combined these seemingly incongruent essentials into something altogether novel nonetheless stood in decidedly stark contrast to the seemingly endless masses clamoring to carve out a niche for themselves in the already overcrowded soft-pop/worship arena.

This time out, on The Return of the King, the pared-back acoustic aesthetic that that buoyed cuts like "October" and "How Long" from the previous release are all but absent this go around. Likewise, the only track that could be considered a bona fide new wave tribute is the lilting drum-machine-and-synthesizer-driven "Holding on," which sounds a bit like a cross between Ultravox and the Eurythmics. That said, the brothers more than compensate for these twin deficits by turning their collective talents toward languishing emo-tinged pop ("Real Strength"), gritty garage rock ("Great"), surprisingly convincing doo wop revivalism ("The Answer") and beautiful Beatlesque balladry ("Shine") - all of which are carried off with ostensible passion and aplomb.

Just as musically remarkable are the E.L.O.-tinged piano-based pop of "Every Little Bit of Praise" and the absolutely joyous George-Harrison-meets-Riverdance textures of the album-closing "Beautiful Name," the latter of which may well stand as the duo's most memorable moment on record to this point. The Finochio's crowning achievement, however, continues to be the manner in which they are able to augment their eclectic instrumental palate with lyrics that are refreshingly straightforward and uplifting without ever becoming even marginally cloying or cliché.

In fairness, the ethereal accouterments of "Light a Fire" can't quite overcome its mostly plodding rhythms, and numbers like "New" and the leadoff single, "The Light," flirt precariously with the all-too-homogenous fare currently favored by the duo's radio-friendly counterparts. That being said, songs like "Fire" and "New" are, thankfully, in the decided minority. And, while it's hard not to miss the quirky, and thoroughly engrossing, folk pieces that dotted the last project, their absence ultimately winds up allowing the compositions on the latest effort to fall together into a comparatively more cohesive whole. To be sure, even though it lacks the gloriously ragged, lo-fi approach that rendered its predecessor so uniquely appealing, the most recent offering from the Royal siblings is still a hands-down winner that stands shoulder to shoulder with the exceptional and engaging work which came before it.