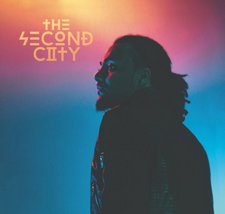 
Originally envisioned as a four-part series, Steven Malcolm's The Second City LP seems to be skipping its originally announced third and fourth installments in favor of a full-length album packaged with the first two Part EPs. While this seems to be an odd marketing move, the end result is a solid collection of 15 hip-hop tunes infused with the gospel. The six new tracks present continue in the same vein as the previous releases with head banging beats, elements of reggae, and occasional pop/worship.

The album is sequenced in the chronological order that these songs were released with The Second City Part 1 taking up the first four tracks (front-loading the album with guest features), Part Two as the next five tracks, and then the newest six tracks rounding out the album. A more thoughtful arrangement of the tracklist may have been beneficial, but as-is, the order works surprisingly well. Because of the continuity in production value, the intentionality behind The Second City theme (especially in Part 2 and the new tracks) and a similar mixture of styles from release to release, The Second City ends up being quite a cohesive album.

The songs on The Second City loosely fall into four categories (from most common to least common): straight-up hip-hop tracks (On Ten, Been There), hip-hop tracks that lean heavily into reggae (Devil Is A Liar, Bob Marley cover Redemption Songs), hip-hop tracks with some hispanic influence (Fuego, Heart of David) and pop/worship songs with lightly rapped verses (Even Louder, Overflow). All styles are generally pulled off with skill and when paired with Malcoms vulnerable lyrics, it proves to be a really engaging listen. That said, The Second City is not a perfect release. The boastful lyrics scattered throughoutthough toned down from his debutmight turn off some, but it is balanced well with praises to Jesus and honest lyrics about struggling with and/or overcoming sin. The biggest criticism isnt necessarily a direct one, more so that most songs dont reach an exceptional level of artistry and only starts to connect emotionally. There are a few really standout tracks, such as Been There with its low and heavy beat, the quasi-corporate worship chorus / rapped verses of Even Louder (which features the enchanting vocals of Leeland Mooring in the long bridge), and the single, Watch. Of the new tracks, the one that has the most potential is Heart Of David, which takes a hard look at Malcolms desire to give glory to Jesus while also feeling the weight of sin. Once again, though, this song slightly falls into the shadow of what it is not instead of what it is; the title makes you wish for a story-based song directly about David and/or it could have used more personal anecdotes that Malcolm has clearly alluded to in the past.

Overall, The Second City is a nice improvement from Steven Malcolms self-titled debut. This album is more geared towards people who like popular styles of rap over underground hip-hop, so if you fit into the former category, definitely give this album a shot. Malcolm has a lot to say, and if he keeps up the hard work, he has a bright future ahead of him.