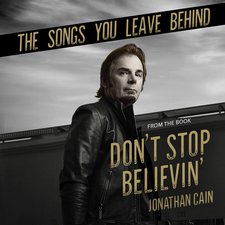 
Despite a musical career that now spans parts of five decades, a slot behind the ivories in one of the most popular bands of all time, and co-writing credit on the top-selling download track of the last century, Chicago native, and current Journey keyboardist, Jonathan Cain has still managed to celebrate a few firsts over the course of the last three years - at least as far as his solo discography is concerned. 2016's What God Wants to Hear, his tenth solo outing, found Cain crafting his first specifically Christian-themed album. Its 2017 follow-on, Unsung Noel, was his debut Christmas offering. And his latest undertaking, Don't Stop Believin', represents the intrepid multi-instrumentalist's first foray into the world of print.

A companion of sorts to the abovementioned, and aptly-titled, memoir, The Songs You Leave Behind clocks in at a generous 70-plus minutes. Featuring seven new and unreleased tunes, the album ties in, to varying degrees, to the themes found in his book. The title cut, which features a salvo of tasty guitar flourishes courtesy of Journey guitarist Neal Schon's son, Miles, speaks to the legacy left by a writer's work. "The Day They Became Angels" memorializes the victims of the December 1, 1958, fire that claimed the lives of nearly a hundred of Cain's classmates at Our Lady of the Angels elementary school in Chicago. And the slightly countrified "What Else Have I Missed" lays bare the struggles and sacrifices that so many artists have to make when it comes to their families - particularly their children.

Those who haven't heard Cain's solo efforts may be surprised to find that, much like the better part of his back catalog to date, the most recent project sounds very little like the music he wrote for, and now plays with, Journey. There isn't a spritely arena-sized pop gem on the order of "Separate Ways" or "Any Way You Want It" - much less an all-out rocker like "Chain Reaction" or "Edge of the Blade" - anywhere to be found. But, while such an exclusion might well pique the interest of Journey fans who migrate to slower Perry/Cain/Schon compositions like "I'll Be Alright Without You" and "When You Love a Woman," even those listeners would be advised to sample a track or two prior to diving in head-first, given that the record mirrors the smooth, adult-contemporary soft rock leanings of artists like John Tesh and Jim Brickman, noticeably more than it does the typical Perry-era Journey ballad.

All that having been said, even though many a dyed-in-the-wool rocker may be inclined to deny the release even so much as a passing glance, those with the patience to sift through the proceedings with open minds and attentive ears may find themselves walking away with a heightened appreciation of the intricate and complex songcraft that went into making "Better Man," "When the Spirit Comes" and "Baptism Day" the winning entries that they are. In fairness, not every track makes such a lasting impression, and, like any work of this sort, Cain can find himself making the occasional foray into territory that just about everyone outside of the already converted would be tempted to label as cloying. By and large though, any such pitfalls are skillfully avoided and, given its hefty running time, there's still a fairly sizable amount of winning soft pop for genre aficionados to sink their teeth into. Hardly an album to exhilarate Journey fanatics or convert legions of naysayers, Cain's newest record nevertheless finds the talented composer quietly going about the business of crafting the soothing, heartfelt music that he so obviously enjoys.