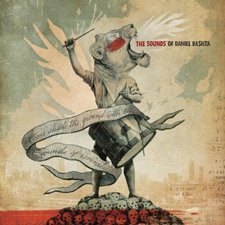 It is always a risk to listen to a new artist. Sometimes it's the freshest and most beautiful thing to hear. However, more often than not, it tends to lean towards the unoriginal and commercial. But when approaching the new record from Daniel Bashta, we're not encountering a new artist. People have been singing his song "Like a Lion" for the past two years with great acclaim. The lyrics have seemed to resonate with the everyday believer, however, will the rest of The Sounds of Daniel Bashta do the same?

The album opens with the ethereal "Dreamers;" it echoes the scripture "awake oh sleeper," calling the believer to worship and action. Musically, it is reminiscent of Arcade Fire and Sufjan Stevens as it utilizes the harmonies and choirs to create more depth. The only mild flaw that it runs into is the lack of structure; this might bother some listeners and for others it might be what draws them in. This similar lack of structure is used on a number of songs, including "Freedom Calling" and "Unlock My Roar." They have their defined choruses but everything else sounds like free expression.

An early gem of the album is "The Sound." Bluntly put, it's full of rage and anger towards Hell as Bashta sings, "Hell can you hear me? Can you hear me? Are you listening? Darkness do you fear me? Do you fear me? Are you trembling?" It's that bold frankness in the lyrics that creates an atmosphere of righteous anger toward sin. While not glorifying Hell by bringing it attention, Bashta degrades it to a powerless nothing because of the glory of God. One word comes to mind when thinking of this song: heavy. On more of lighter note are "Potter's Wheel" and "Pursuit" as they show the softer side of Bashta. Both songs are beautiful lyrically due to their transparency and honesty, but with both lasting a little longer than necessary it loses a bit of its impact. Regardless, the balladries contained within these two songs are well done and lend themselves to corporate worship settings.

"He's Like A Lion" and "Like A Lion" work together as a two-part masterpiece. While the former is a poem, the latter is the well-known epic worship song; the tracks are perfected by each other. Bashta's confident declaration, "My God's not dead, He's surely alive, He's living on the inside roaring like a lion," is sure to continue for a number of years. It truly is one of the most creative expressions of worship to come from a songwriter in a long time.

The Sounds is a very well done, creative, and bold offering of some fresh worship music. It isn't flawless by any means but it is that messiness that is sure to garner attention. Some listeners might not find Bashta's vocals desirable, while others will think they are amazing. Musically, the album can sound very busy or extremely simple at points, thus dynamically, it is all over the place--another thing that people might disagree on. Nevertheless, the sounds Bashta has produced are ones that are not often heard and, in my opinion, they need to be heard more often.