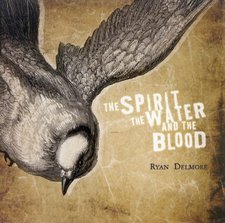 Ryan Delmore
The Spirit, The Water and The Blood

Americana or Roots music has been defined as singer/songwriters blending folk, bluegrass, rock and country together, or better summed up with the statement "too country for rock-n-roll and too rock-n-roll for country." The praise and worship music genre has not had much to offer fans preferring this style of music until recently with artists like John Mark McMillan and Josh White. Ryan Delmore is a nice addition to this list because of his honest songwriting with folk, country and rock influences melding together with simple yet heartfelt praise songs to God.

Delmore has been leading worship in Vineyard Churches for over 15 years on the coast of California. He has been involved with Vineyard Music and recorded several songs for them, such as "Better Than Life," "Set Me on Fire," "Let It Come" and "Jesus Name." With his latest release, The Spirit, The Water and The Blood, Ryan Delmore combines his passionate songwriting with his rootsy style of rock and country that draws resemblances to Bob Dylan, Ryan Adams and Neil Young's Harvest era. The album title is pulled from 1 John 5:8, which states "And there are three that bear witness on earth: the Spirit, the water, and the blood; and these three agree as one." The album was recorded in California and produced by fellow Vineyard artist Chris Lizotti and features Marc Ford (The Black Crowes) on acoustic and electric guitars which add a bluesy feel to Delmore's folk style.

The record starts off with "Mercy," which features warm acoustic guitars and heavenly harmonies featuring Delmore and harmony vocalist Kirsten Ford, then switches gears into the bluesy "Sing Like Mary Sang." Delmore shines vocally on the more upbeat Springsteen-influenced acoustic rockers, like "Provide for Me" and "Falling Down," that are written as love songs to our Heavenly Father. Songs like "Jesus Name" will fit right into your worship service with lyrics like "Every knee will bow in heaven and the earth, every eye will see the measure of your worth." More intimate songs, like the folk influenced "Teach Me All Your Ways" and "Nowhere To Be Seen," will help point your heart to God best suited for your quiet time or afternoon coffee on the porch.

Ryan Delmore's, The Spirit, The Water and The Blood, combines all the right ingredients with honest songs to God, beautiful melodies and its organic sound. This album is the perfect fit for Christian music fans looking for a little twang in their worship.