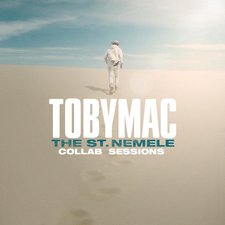 
TobyMac continues his string of quality releases with his fifth remix album, called The St. Nemele Collab Sessions, bringing in a multiplicity of producers and guest vocalists to offer a fresh take on ten of the songs from his 2018 album, The Elements. There is also one all-new song, "Heart Of My Beat," included as the last track of the album. For most fans, remix albums are typically polarizing; either you love them or you hate them. Purists will have trouble hearing anything better than the original, while some fans just want to roll down their car windows and let the tunes fill the air of the night. Bottom line, just like his four prior remix albums, this one is a mixed bag. As with any TobyMac album, the production is pristine; everything here sounds amazing. Also, the addition of guest vocalists adds an element of vocal diversity missing from prior albums. However, this positive addition of outside singers is also the album's greatest weakness as not all vocalists fit the song stylistically, or have enough to do to justify inclusion.

In my opinion, the two vocalists that work best are the female assisted songs "The Elements" and "Scars (Come From Livin')," which feature Jen Ledger (LEDGER/Skillet) and Sarah Reeves, respectively. The duo of Toby and Jen on "The Elements" is my pick for the best overall song on the album. The David Crowder collaboration on "Hello Future" is another highlight, combining Crowder's electronica experience with DJ Maj's remixed beats. Gospel artist Johnathan McReynold's smooth voice takes "Everything" to another level, transforming it from a pop radio song to a trap-soaked jam. Aaron Cole fits "Horizon (A New Day)" well, standing out most in the final third of the song with his fast-paced rapping and ad-libs. Lastly, the new song "Heart Of My Beat" is a worthy addition to the TobyMac canon with its high presence of horns and trap beats propelling the tune forward.

Conversely, the song collabs that don't quite seem to work as well are from similarly fantastic singers; they just don't fit the tone or style of the song quite right. Curious pairings include MercyMe's Bart Millard, Jordan Feliz, Matt Maher, and Cory Asbury. These are all quality singers, they just don't have much to add to the remixed versions of these songs, or stand out in any way worth noting. Songs "Overflow," "See The Light," "It's You," and "I Just Need U" play it a little too safe, and come off as experiments best left to a b-side complication. Largely, that's my biggest gripe with Toby as a fan from the DC Talk days forward; where are the risks? What about some collabs with producers or beatmakers outside of the Christian music bubble? St. Nemele feels very calculated and controlled, sterile and safe. I would have loved to see him take some chances on this remix project that doesn't carry with it the pressure of a normal album to hit big. For that matter, what a better place to feature former bandmates Michael and/or Kevin in place of one of the worship singer collabs of Matt Maher or Cory Asbury. Why not work with crossover artists and producers like Paul Meany (MuteMath), Tyler Joseph (Twenty One Pilots), Ryan Tedder (OneRepublic) or Tommee Profit? What about a vocalist that's not in the CCM market like Tori Kelly or Justin Beiber? Perhaps this approach just doesn't fit his mission, but this feels like a necessary step to stave off staleness if he is to continue making music into his fifth decade.

All in all, St. Nemele is a quality project and has several songs that deserve high marks, but this reviewer just doesn't see a whole album of tunes that needed to be released. However, fans of TobyMac, his remix albums, and trap beats will find plenty to enjoy with "The Elements," "Hello Future," "Everything," and "Scars (Come With Livin')" being the best of the bunch.

For TobyMac's fifth remix project, The St. Nemele Collab Sessions, the veteran artist puts a new spin on 10 of the 11 tracks from his latest studio album, The Elements. To help bring a new identity to these songs, Toby brings in a slew of guest artists -- an ironic decision when you look at the decrease in the typical amount of guest features from The Elements. The guest artists here take over a part of the song (usually the second verse) and add background vocals throughout. It's a fairly safe and easy change, whereas it would have been more interesting to hear a new bridge (what a perfect place to do something different), a smash-up, or some other creative ideas rather than a simple modification like changing singers. The exception to this is "Horizon (A New Day) (Stereovision Remix)," which adds new lyrics sung by Gotee Record's own Hip-Hop/R&B artist Aaron Cole. That said, each feature is integrated well and it is exciting to hear major players and newcomers to the CCM industry join Toby on these tracks. Though there are nine different producers spanning 10 remixed tracks, there is a cohesiveness that we don't typically hear on a TobyMac remix album. There is a fairly steady vibe to the whole project and a smoothness that is void of dramatic drops. It makes it easy to listen to, though you might find yourself tuning out a bit at times. The new track "Heart of My Beat" fits in with the fluid tone of this project. The song serves as a mission statement of sorts with God always being the "heart" of the music Toby makes. As expected of any TobyMac project, The St. Nemele Collab Sessions is immaculately produced and aesthetically pleasing. This will make a solid addition to the completists' collection of TobyMac music, but if you haven't picked up The Elements or listened to previous remix projects, like Eye'M All Mixed Up or Renovating Diverse City, you might be better off starting there. - Review date: 8/27/19, Christopher Smith of Jesusfreakhideout.com

Where early solo-career efforts like 2003's Re:Mix Momentum and 2005's Renovating Diverse City were custom fitted to go great guns on the average dance floor, former dc talk front man TobyMac's latest remix project, The St. Nemele Collab Sessions, follows in the footsteps of its decidedly more tempered current-decade predecessors, Dubbed & Freq'd and Eye'M All Mixed Up. While there's certainly nothing inherently wrong with dialing back the funk or lowering the beats per minute counts, cuts like the Jordan Feliz collaboration, "See The Light," are fairly indicative of the latest album's overarching tendency to come across as merely listless and lumbering rather than laid back or subtle. In fairness, "Hello Future" is ingratiatingly catchy and tracks like "I Just Need U" come pretty close to approximating the spit and vinegar of old. By and large, though, fans of McKeehan's more bracing early remix-oriented offerings will want to pass on this less invigorating newest retooling, while those intent on purchasing his latest album, The Elements, will want to skip this collaboration-based rendition and pick up the superior original version instead. - 8/27/19 Bert Gangl