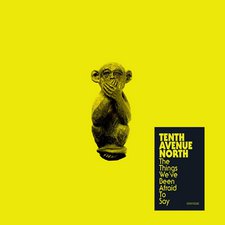 
Tenth Avenue North has always been a slightly more subversive band than they've been credited with. Tackling hard subjects (like human trafficking, political divisiveness, isolationism) with a subtle grace and then often fleshing those songs out with longer explanations and convicting preaching in concert, the band has long had "a lot to say". The songs might float by at first and find a home on Christian pop radio, but there is a tougher core to them than is obvious at first glance.

But with The Things We've Been Afraid To Say EP, the band and their outspoken lead singer Mike Donehey have committed to a frontal assault on taboo, Church subjects, all while wrapping up the hard conversations in glorious 80's era pop music that could easily sit alongside The Breakfast Club soundtrack.

Opener "Covenant" does a surprise bit of heavy lifting for a tune so light and effervescent on the surface. Against a wall of tuneful, vintage synths, Donehey spins a tale of martial commitment and temptation that feels both lived-in and more nuanced than the average song of commitment. "Fear comes in the dead of night / When I look into your eyes Wonder if you felt a spark / With someone else when we're apart / But it's alright, it's alright / We trust our love is / We trust our love is / Covenant." The admission that couples can "feel a spark" with someone else is a rare bird in the CCM market. But Donehey nails the idea that the promise (or "covenant") between marriage partners would not be as powerful a thing if there were no temptations in the equation. "I know it sounds crazy to say we can feel / Things for other people if our love is real / But to choose our love makes it stronger in the end." A song like "Covenant" is a needed, mature look at long-term love, and stands out as one of the better relationship songs written in the Christian music market.

Second track "Secrets (Light Shine In)" is likewise a hard look at the secret lives that we so often live in the 21st Century (with the endless access to anything we desire to view or participate in at our fingertips). "Haven't we all loved things in the darkness? / Haven't we all lied if we're honest? / We cheat and cover up / To protect what people think of us / But we end up hostage to all our secrets." The admission that many are "hostage" to their secrets is a terrific turn of phrase, and serves to amplify the very real idea that there is a crisis amongst believers in this regard.

The band continues this line of thought in "Counterfeits," making a subtle mention of internet pornography in relation to the fake "highs" we chase. "Why can't I get it through my head / A screen can't give what it promises, no / I keep on falling for the trick / Time after time and time again, again / I want the truth, I want the real thing / I want the genuine to hold to the light / In a world that keeps us faking / Illuminate, reveal what I'm chasing / It's paper thin, in deep the skin / I'm done with it, counterfeits." Putting lust agents like pornography in the context of a counterfeit experience (to the true gift of relational physical intimacy) is another nuanced turn of phrase. Donehey wisely notes that "if it don't cost me nothing, I know it's not real." The epic, 80's era synthesizer backdrop (think Netflix's Stranger Things soundtrack) gives the tune a neat sonic heft and a needed earnestness.

"Love Anyway" is a bouncy number that takes aim at the current divided political climate of the United States, but wisely advocates for a middle way. "Yeah, I don't wanna start a / Another new debate / 'Cause when I turn the news on / All I feel is heartbreak / Left, right, hate on both sides / Oh, will we ever learn / We can stop drawing lines? / Enemy lines, enemy lines." Donehey rightly diagnoses the chasing of safety and security in the taking of positions that create false oppositions with our fellow citizens. "You told me that the battle / Isn't flesh and blood / But when safety is my idol / It's impossible to trust Race, guns, refugee wars / We're known for who we're against / Yeah, but who are we for? / Who are we for? / Who are we fighting for?" He then goes a bit further and personalizes the antidote to divisiveness. "I wanna hear before I speak / Offer grace before critique / I wanna live like I got no enemies / Lord help me, Lord help me / To love anyway." "Afraid," a song from the band's most recent album Followers, (but remixed slightly here) comes next, and bookends this theme of fear and division well.

But after all of that, the band's most heart-wrenching and poignant moment (perhaps, to date) comes with the sexual abuse theme of "I'm Listening." Against a mournful acoustic guitar and synthesizer that bring to mind classic band The Police, Donehey spins the very personal account of a mother (perhaps Donehey's own mother, but the song wisely leaves that detail to be determined by the listener) who reveals a painful secret to her son. "Why didn't anyone believe / A single word when you said it was / It was your father's friend? / Yeah, only 14, life goes on / Who knows, you prob'ly brought this on yourself / It's better not to tell / Mother, mother, how many tears have you cried? / Mother, mother, I will listen to you tonight to the truth." He then moves on to the story of a sister who faced a similar tragedy. "To a daughter now it happens too / Freshman year, he's waiting in your bed / Suppose to be a friend / You tried to forget the way you felt / You fought, but he forced himself on you / He left you black and blue / Sister, why did nobody trust your cries?" Donehey also includes the tale of a young man abused by a teacher before moving on to the best advice he can give on the subject; "And brother, where could you run? / Shame to the silent and made a prison / Could you learn to speak again / If we were only listening?"

All too often the response to the #MeToo movement amongst Evangelicals has ranged from the snide, "I told you so" variety to the rabid deniers or minimizers. And while there is a great deal to talk about with this subject, and many sides to consider, Donehey reveals step number one in the biblical advice to be "slow to speak and quick to listen." Too many times we are quick to offer a hot take on a subject, forgetting that there are real people (and loved ones) who have a painful personal perspective to offer.

The Things We've Been Afraid To Say is a bit of medicine that is made easier to swallow by lighter songwriting techniques and vintage sounds, but don't let that fool you. It's one of the most profound and important statements made in Christian music this year, and a truly convicting listen.

Editors Note: The band has released a short "teaching video" for each of the six songs on this EP, and they can be found on YouTube or the band's website. Each one goes deeper in depth on the subject of the song, and offer further insight and questions to consider. They are highly recommended.

Christian pop rock mainstay Tenth Avenue North has been around the block a few times, a fact which becomes a little too obvious on the band's latest EP, The Things We've Been Afraid to Say. It's always difficult to separate the music from the lyrics, but this release necessitates such an evaluation. Poignant lyrics on the opener ("Covenant") are indeed noteworthy: "'Cause fear comes in the dead of night when I look into your eyes / wonder if you've felt a spark with someone else when we're apart / but it's alright, our love is covenant." A few other gems are scattered throughout, granting a little more credence to the EP's attention-grabbing title, such as: "We cheat and cover up to protect what people think of us / but we end up hostage to all our secrets" and "I gave up love to chase my lust / I treated sex like it was money / and I could never get enough / I want the genuine to hold to the light / in a world that keeps us faking, illuminate, reveal what I'm chasing."

Unfortunately, the album's melodic content feels stagnant and uninspired, with the exception of "Counterfeits" and the contemplative closer, "I'm Listening." The lack of originality greatly detracts from what could have been a notable project. Overall, The Things We've Been Afraid to Say is a serviceable release which boasts quality lyrical content, but the EP ultimately fails to stand out amongst a sub-genre that's been revisited a few too many times. - Review date: 10/23/18, David Craft of Jesusfreakhideout.com